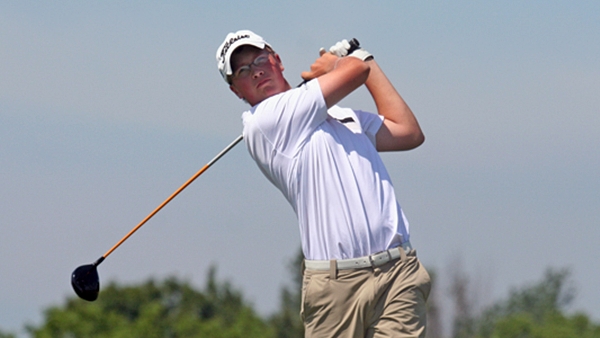 Niagara Falls, Ont. – After Wednesday’s suspension of play during the second round of the Canadian Junior Boys Championship, Austin James, 18, of Bath, Ont. resumed his round at 7:00 a.m. to grab the top spot on the leaderboard.

James shot a second round 8-under 64 that matched the course record on Legends on the Niagara’s Battlefield Course, originally set on Tuesday by 17-year-old Patrick Murphy of Crossfield, Alta. James was 9-under through 12 holes at the time of yesterday’s suspension for the championship. He birdied two additional holes when play resumed Thursday morning to finish at 11-under 133.

“I came back out this morning planning to just keep playing the way I was playing yesterday. The first couple swings were a little tight because I was a little nervous, but other than that it was good.” said James. “I’m going to go get some sleep, then when I come back hopefully the next round will go the same way.”

A.J. Armstrong, 17, of St. Albert, Alta. sits five strokes behind James at 8-under 136, while Team Canada Development Squad member Matt Williams, 18, from Calgary is in third. After an eagle on the par-5 11th hole, Williams sits at 5-under 139 heading into the third round. Murphy, who shot 64 in the first round to lead, fell into a tie for sixth after shooting a second round 5-over 77.

Thursday’s third round will begin at approximately 3:45 p.m. on Legends on the Niagara’s Battlefield Course, with the field being cut to low 70 players and ties.

In the Inter-Provincial Team Competition, which was contested over the first 36 holes of the Championship, Team Alberta claimed first place over Team Manitoba. The Team Alberta contingent of Tyler Saunders, 18, of Sturgeon County, Andrew Harrison, 17, of Camrose, and Jack Wood, 18, of Banff, finished at 5-under 283. Team Manitoba finished four strokes behind at 1-under-287, while Team British Columbia was third at even-par.