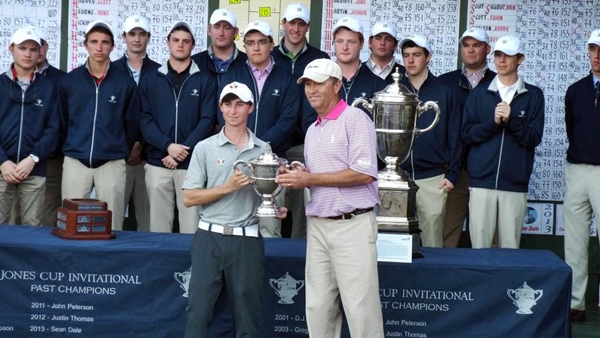 SEA ISLAND, Ga. – Team Canada’s Austin Connelly went the distance Sunday, coming back from a seven-stroke deficit to win the Jones Cup in a playoff at the Ocean Forest Golf Club.

Connelly started the day in a tie for ninth, but fought back in Sunday’s third and final round with a six-birdie, 4-under 68. Despite bogeying the 18th, Connelly headed into a playoff against Kyle Jones of Snowlake, Ariz.

In the first playoff hole, Connelly knocked down a 20-foot putt for par to keep the match alive. The Arkansas University commit rode that momentum into the next hole with a birdie to put away Jones and take home the title.

With the win, Connelly becomes the second straight Canuck to win the Jones Cup – he finished runner-up last year, also making it to a playoff before falling to Team Canada teammate Corey Conners. Together, the duo of Connelly and Conners won Canada the Tailhade Cup this past November.

Connelly, a dual-citizen of Canada and the U.S., records his first win as a member of Team Canada after being named to the 2015 National Amateur Squad. He currently sits as Canada’s lowest ranked amateur at No. 7 in the World Amateur Golf Rankings (WAGR).

“I loved Austin’s game plan this week. Things didn’t go as planned yesterday on a very difficult day but he hung in there and gave himself a chance today,” said Derek Ingram, Men’s National Squad Head Coach. “His play in the playoffs was very impressive–he never changed his routine. It was quick, athletic and committed and he hit several excellent shots.”

With the victory, Connelly earns and exemption into the McGladrey Classic, which takes place November 16-22, 2015 at the Seaside & Plantation Courses at Sea Island Golf Club.