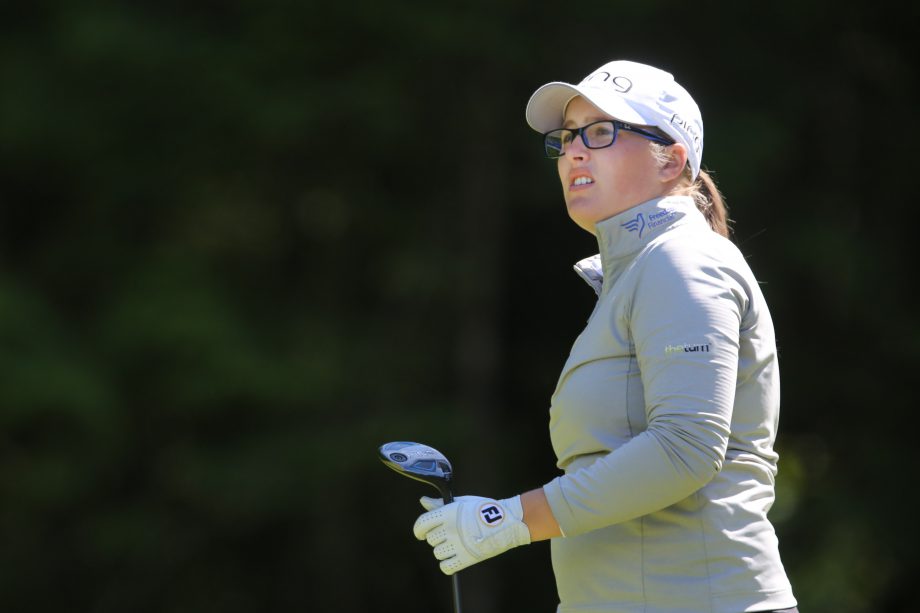 SOUTH BEND, Ind. —Team Canada member, Augusta James, sits T6 after the first round of the Four Winds Invitational. She carded a 4-under 68, putting her just two strokes behind the lead, firing five birdies and one bogey.

Sitting one stroke behind James is Samantha Richdale (68) with a share of 12th.

For two hours and 33 minutes this afternoon the Four Winds Invitational was under a weather delay, but it didn’t stop Samantha Wagner (Windermere, Florida) and Dana Finkelstein (Chandler, Arizona) from escaping a finish in the dark as co-leaders.

Each player shot 6-under par 66 to head into the second round atop the leaderboard. Just like both found a different way to that mark, they also have different backgrounds on the road to the LPGA Tour.

Finkelstein was a 2016 Symetra Tour graduate and today, signed a bogey-free card. Wagner is a Symetra Tour rookie, who surrendered one bogey and used seven birdies to join Finkelstein in looking down on the rest of the 144-player field heading into round two at Blackthorn Golf Club.

“I definitely think this helps getting settled a little more,” said Wagner, a University of Florida alumna. “This is the first time I’ve shot more than I think 2-under on the Symetra Tour this year. I’m a pretty aggressive player as it is, so just keep doing what I’m doing because it’s working.”

Meanwhile, one-shot back at 5-under par is a group of three players, including Louise Stahle (Lund, Sweden), Pavarisa Yoktuan (Nakhon Is Thammarat, Thailand) and Leslie Cloots (Antwerp, Belgium).

Similar to Wagner and Finkelstein, the path to this point for Stahle, Yoktuan and Cloots is quite contrasting.

Stahle turned pro in 2006 and has spent time on the LPGA, as well as Ladies European Tour (LET). The veteran fired six birdies with one bogey today.

“You’ve got some great players out here and there’s a lot of good competition,” Stahle said. “I think it’s getting tougher every year. I remember when I started, I thought it was tough then, but it’s getting really competitive. The main focus is to get back to playing LPGA, and Symetra Tour is a great way to get there.”

For Yoktuan, two bogeys and seven birdies helped her shoot 67. Coming back from a week off, she turned in this performance with brand-new Callaway irons and wedges, as well as putter. It also came at a good time health-wise.

“In North Carolina I had a wrist injury and it hurt,” said Yoktuan. “I’m recovering and it’s getting better. As I’ve healed, I’ve continued to play better and just keep going.”

Finally, Cloots started working with new coach Patrick Kelley in February. He is based out of Durham, N.C., at Old Chatham Golf Club, and the work the two have put in definitely showed today with results that included eight birdies.

“Totally different swing, kind of starting over,” Cloots said. “I had a lot of basics already set, but it’s really nice because before I thought it was a quick fix. With Patrick, we always work on the same things and just expand on it. I feel like I’m finally getting it on the course.”