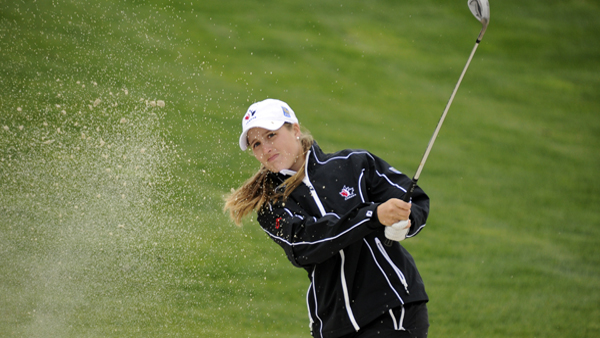 Woodstock, Ont. – Team Canada’s Augusta James set records with an 8-under 63 on Thursday at the Canadian Women’s Amateur Championship.James’ bogey-free 63 set a new women’s course record at Craigowan Golf and Country Club and also became the lowest 18-hole score ever recorded in the history of the 101-year-old championship. “It’s maybe my second or third bogey-free round ever, I think it might be my first one in a tournament,” James said. “It’s always good to have one of those, you come so close sometimes and I’m happy that I could eliminate the big mistakes that would turn into bogeys or doubles.” The Bath, Ont. native opened with a 5-under 30 on the front-nine that was highlighted by four straight birdies over the 8th, 9th, 10th and 11th holes at Craigowan. “I putted well but I hit the ball pretty close too which made it a lot easier, I made a few putts that you don’t expect to make everyday,” she continued.The 21-year-old currently holds a six-stroke lead heading into the final round over Team Canada’s Brooke Henderson of Smiths Falls, Ont. and Australia’s Su-Hyun Oh. Sitting at 12-under 201 for the championship a win on Friday would be the biggest title of her career.“It’s been a few years since I’ve held a trophy for first place and it would be a great honour to have competed with this field and won,” the N.C. State Wolfpack senior said.  “That is a long way away still, lots of work left to do tomorrow for that.”Henderson, the defending champion, posted a 1-under 70 playing alongside her Team Canada teammate in the final pairing to finish 54-holes in a tie for second place alongside Oh who fired a 4-under 67 on Thursday. In the Mid-Amateur division (25+), Christina Proteau, the defending champion, carded a 1-under 70 to open a large gap in the race for her fourth consecutive title. The Port Alberni, B.C. native currently sits eight strokes ahead of Helene Chartrand of Pincourt, Que. Chartrand leads the Mid-Master division (40+) by nine strokes over Marion Reid of Etobicoke, Ont. The champion of the 101st Canadian Women’s Amateur Championship receives an exemption into the 2014 Canadian Pacific Women’s Open and also the 2014 U.S. Women’s Amateur. Starting times, post-round results, full field list, and live scoring are available here.