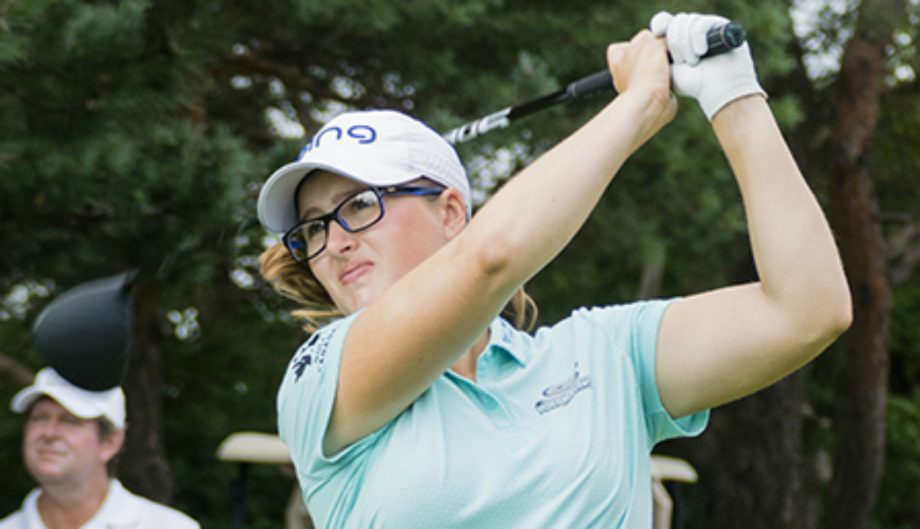 With laser-like precision off the tee at Scarboro Golf & Country Club, Augusta James found herself atop a crowded leaderboard at the DATA PGA Women’s Championship of Canada.

“Other than the eighth hole, I hit every fairway out there,” James said. “Hitting a lot of fairways and my accuracy with longer clubs are definitely the strengths of my game.”

Apparently, making birdies is another strength of James’. Her day included seven birdies and three bogeys.

Remarkably, James wasn’t the only one who made seven birdies Tuesday at Scarboro. Lindsey McPherson of Flushing, Mich., also made seven—however, she made all seven of hers in succession.

“I can honestly say I’ve never made seven birdies in a row, so that was pretty cool,” McPherson said. “It was kind of funny though because I didn’t feel like I was playing that great. But then I looked at the card and saw that I had made seven in a row.”

A trio of Canadian standouts—Anna Kim, Anne-Catherine Tanguay and Brittany Marchand (who is the most recent winner on the Symetra Tour)—along with Americans Madeleine Sheils and Samantha Troyanovich are all at 2-under-par, T4.

The DATA PGA Women’s Championship of Canada’s most decorated champion, Lorie Kane (a five-time winner) and Jenny Lee of California lurk just three back of James at 1-under-par.

The winner of this year’s championship will earn an exemption into the CP Canadian Women’s Open at the Ottawa Hunt & Golf Club, Aug. 21-27.

Scarboro is in great company among such renowned Tillinghast courses as Winged Foot, Ridgewood, Five Farms East, the redesign of Baltusrol and the fearsome Bethpage Black at Farmingdale, Long Island, N.Y. The latter literally consumed the games greatest golfers at the 2002 U.S. Open.

Scarboro remains the only course outside the U.S. designed by Tillinghast.
He masterfully used Highland Creek, which comes into play as many as 11 times in 18 holes, and the hilly terrain, gullies and trees as natural hazards, making artificial hazards almost unnecessary at Scarboro.

Admittance to the DATA PGA Women’s Championship of Canada is free and spectators are encouraged to attend during the 36-hole championship play.