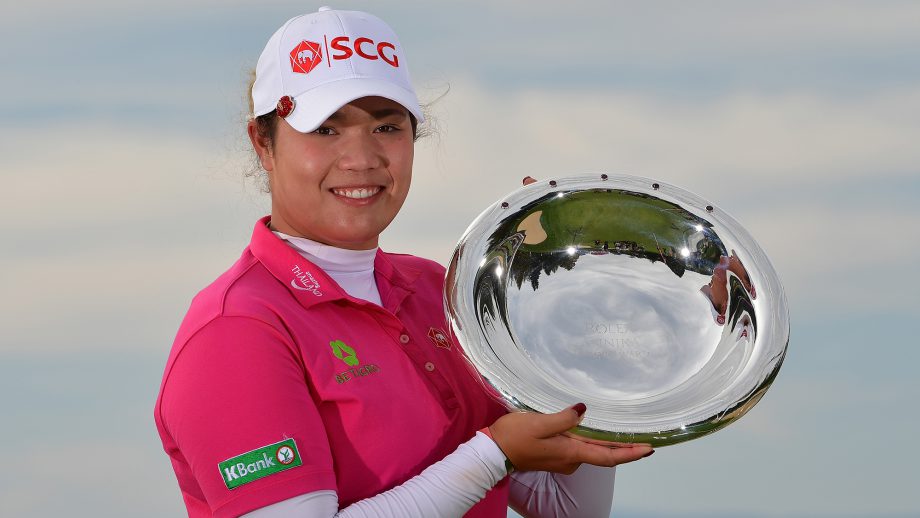 EVIAN-LES-BAINS, France – Ariya Jutanugarn, of Thailand, has won the 2018 Rolex ANNIKA Major Award, which recognizes the player who has the most outstanding record in all five major championships during the current LPGA Tour season.

Jutanugarn received the honor thanks to her win at the U.S. Women’s Open, her second career major championship victory, and ties for fourth place at the ANA Inspiration and the Ricoh Women’s British Open.

“I feel great, I feel really honor to join the list of winners because of all the big names,” said Jutanugarn. “I watch Annika since I was young. She is my idol as always. I’m really like, ‘Look how she is doing?’ And I really want to follow her footsteps. She inspire me a lot. And I really want to thank her for like all the great everything for the LPGA. It’s amazing for me.”

Points for the Rolex ANNIKA Major Award are awarded at all five major championships to competitors who finish among the top 10 and ties. To take home the award, a player must also win at least one of the five majors. Pernilla Lindberg (ANA Inspiration), Sung Hyun Park (KPMG Women’s PGA Championship), Georgia Hall (Ricoh Women’s British Open) and Angela Stanford (The Evian Championship) were the other players to qualify this season.

Heading into The Evian Championship, six players were still in the running for the 2018 Rolex ANNIKA Major Award but Sung Hyun Park dropped out of contention for the honor when she missed the cut on Friday. That left RAMA standings leader Jutanugarn, Lindberg, Hall, Inbee Park and So Yeon Ryu to vie for the award over the last two rounds at Evian Resort Golf Club.

Jutanugarn has enjoyed one of the best campaigns of her LPGA career this year. Her three wins (Kingsmill Championship presented by GEICO, U.S. Women’s Open conducted by the USGA and Aberdeen Standard Investments Ladies Scottish Open) are the equal-most by a single player on Tour this season and represent the third successive time she has won multiple titles during the same year. Jutanugarn has racked up 10 additional top-10 finishes, including a runner-up spot at the Bank of Hope Founders Cup.

With her third win this season, at the Aberdeen Standard Investments Ladies Scottish Open in late July, Jutanugarn moved back to No. 1 in the Rolex Women’s World Golf Rankings, a spot she held for two weeks during June of 2017. She is the only Thai player (male or female) ever to reach No. 1.

“I’m pretty happy about the way I played this season,” said Jutanugarn. “I still have a lot of thing to improve and I really want to improve a lot. I didn’t expect to be like this good before, so everything is just good for me.”

A 10-time winner on the LPGA Tour, Jutanugarn earned Tour membership with a tie for third at the 2014 Qualifying Tournament. She claimed her first LPGA title at the 2016 Yokohama Tire LPGA Classic and ended up winning four more times that year, including the Ricoh Women’s British Open, before becoming just the second player to win the Rolex Player of the Year, Race to the CME Globe and the LPGA Official Money Title in the same season.

Jutanugarn landed two more LPGA Tour victories in 2017, at the Manulife LPGA Classic and the season-ending CME Group Tour Championship. She is also a three-time champion on the Ladies European Tour.