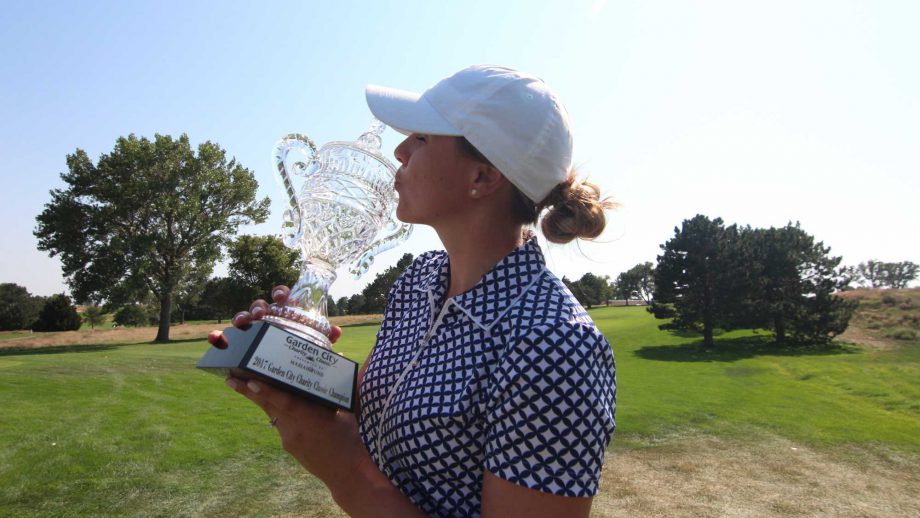 GARDEN CITY, Kansas, September 10, 2017 – When Anne-Catherine Tanguay (Quebec, Canada) woke up Sunday morning, she was so nervous she cried. The nerves didn’t show down the stretch as she made critical birdies on holes 14, 16 and 17 to win the Garden City Charity Classic at Buffalo Dunes by three-strokes. Tanguay carded a 1-under, 71 on Sunday to earn her first career victory. She finished with a three-day total of 5-under, 211. She was one of only two players that finished under-par for the tournament. Katelyn Dambaugh (North Charleston, S.C.) finished second at 2-under, 214 while Emma Talley (Princeton, Ky.) finished third at even-par, 216.

Wind was a major factor again on Sunday with gusts exceeding 35 miles-an-hour and sustained winds over 20 miles-an-hour.

Tanguay, 26, pockets the $22,500 first-place check to jump from eighth to fifth on the Volvik Race for the Card money list with four events remaining in the season. She has now earned $70,995 in 16 starts this season. While Tanguay is not a lock to earn her LPGA Tour card yet, she is in great position. For perspective, No. 10 on the money list in 2016 earned $67,577.

Tanguay entered the day one shot off the lead and was one shot back after the front nine.

“It is just really incredible,” said Tanguay, who gave a lot of credit to her former Oklahoma head coach Veronique Drouin-Luttrell for learning to play in the wind. “Honestly, I feel like this win is a bit out of the blue because last week my confidence wasn’t very high. These past few months have been hard because I don’t feel like I was getting the results. This week, everything clicked. I had really good process goals. I tried to boost my confidence all week and my fiancé (Jean-Hubert Trahan) was doing that for me too.”

Katelyn Dambaugh (North Charleston, S.C.), who slept on the lead, made bogeys on holes 9, 10 and 13 and Tanguay made her run. She made a 6-foot par putt on 13 to take the outright lead at 2-under. Then, she stuck her approach on hole 14 to 12-feet and made a critical birdie to go up two shots with four left. She let out two emphatic fist pumps.

“I’m not sure how it happened because I was extremely nervous today,” said Tanguay, who wrote down goals in her yardage book and referred to them on the back nine. “One of my biggest goals was to pick a target and take an aggressive and fearless swing and that is really what got me through.”

Tanguay made par on 15 and then reached the par-5 16th in two and two-putted for birdie. She kept the momentum going with a 15-foot birdie putt on the 17th hole to build a three-shot lead. Tanguay nearly finished with another birdie on 18, but tapped in from a foot for par to win.

“This year was almost go big or go home,” admitted Tanguay, who made ten starts on the LPGA last year with conditional status. “Last year, I had the taste of playing there (LPGA) and I knew I belonged and I really wanted to accomplish getting back. That has been a huge goal of mine. We will see how it plays out, but I think I’m in a really good position now. I have a lot of trust and confidence now.”

Tanguay will head to the Murphy USA El Dorado Shootout in El Dorado, Arkansas next week.

Before the trophy ceremony started, Tanguay made a special call to her mom and dad, Luice and Yvan, in Quebec. Her parents travel to several events throughout the season, but weren’t in Garden City this week.

“I just thought I was going to burst into tears, but the only emotion I feel right now is happiness,” said Tanguay. “I want to share that with them and I’ve been sharing that with JH this week. They just told me that they are really, really proud of me because now they want to come to the rest of the tournaments. They have always been so supportive of me.”

Tanguay now has six top 10 finishes this season, but this is her first since May. While she hasn’t had the results on the course lately, Tanguay had a life-changing moment occur in late July. She got engaged.

She made a bet with her fiancé, who also serves as her full-time caddy, on Sunday that if she won, he would have to shave his beard. The beard will be gone next week.

“He didn’t want to shave this week so I said we’re playing for the beard,” joked Tanguay. “The beard is going.”