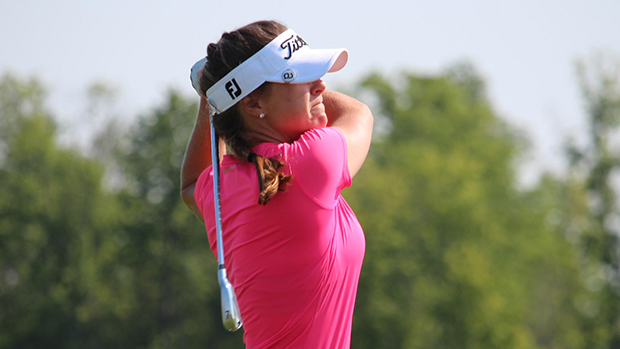 HARRIS, Mich. – Anne-Catherine Tanguay (Quebec, Canada) will take a one-shot lead over Dani Holmqvist (Stockholm, Sweden) into the final round of the Island Resort Championship.

“I think the biggest part of my game this week has been putting,” Tanguay explained. “I’m usually a pretty good ball striker but yesterday I wasn’t as consistent with my ball striking so I hit the range and touched some little things and today was just great.”

Tanguay used six birdies against a lone bogey on 18 to card her second round 67 and put her at 9-under for the championship, a stroke up on Holmqvist who posted a 3-under 69 on Saturday.

“I personally don’t think it’s been easy out there,” Holmqvist admitted. “The score may reflect something else but I think the course has been a really fair and good golf course and I think it’s going to be a good test tomorrow as well especially if the wind picks up a bit.”

Rounding out the final group is Volvik Race for the Card No. 9 Casey Grice (College Station, Texas) who will be looking to capture her first victory on the Symetra Tour.

“I’ve been hitting the ball very well and giving myself opportunities within two feet,” Grice said. “That makes it a little easier and takes the pressure off the putting but I was hitting good putts so a solid day overall.”

The penultimate group will consist of Shannon Fish (Spring, Texas) at 6-under and Samantha Richdale (Kelowna, British Columbia) and Katie Kempter (Albuquerque, N.M.) at 5-under.

FELLOW CANADIAN WINNERS INSPIRE TANGUAY: A.C. Tanguay has seen three of her fellow Canadians – Brooke Henderson, Augusta James and Sue Kim – capture victories on the Symetra Tour this season and would like to be the fourth to take home a win tomorrow during the final round of the Island Resort Championship.

“It’s very exciting for Canadian golf, especially on the women’s side, to have so much success. It’d be amazing to get a win tomorrow,” Tanguay said.

Tanguay, who ranks 42nd on the Volvik Race for the Card Money List, finds herself in a good position to accomplish that heading into the final round as she is the leader by one. The win would mean a little more to the Oklahoma grad as she has taken a shine to the event and venue.

“I think this is my favorite event so far,” Tanguay admitted. “Everything is great about it. The hotel, the casino, the food, everything with the golf course and the people. Everybody is so excited that we’re here and the golf course is in amazing shape too so it’s just been great.”