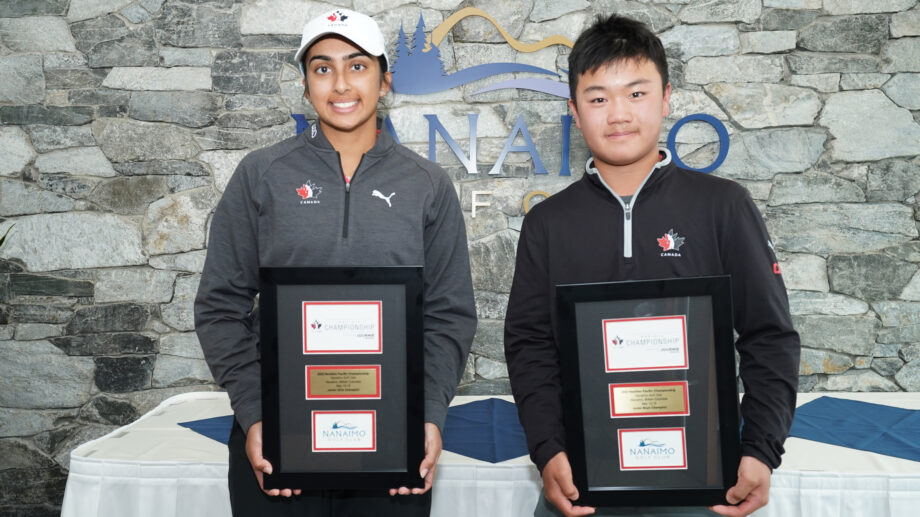 Champions Angela Arora and Eric Zhao [NANAIMO, BC - 15 May 2022] Presentations following the final round of the NextGen Pacific Championship at the Nanaimo Golf Club. (Photo: Chuck Russell/Golf Canada)
Golf Canada

Nanaimo, B.C. — After battling rainy conditions in Nanaimo this week, the final round of the NextGen Pacific Championship – fueled by JOURNIE Rewards wrapped up on Sunday at Nanaimo Golf Club with Angela Arora and Eric Zhao each securing a one-stroke victory to win their respective divisions.

The 54-hole stroke play competition marked the first of eight NextGen Championships and featured a starting field of 119 male and female golfers.

For Angela Arora, who hails from Surrey, B.C., the win marks the second championship title of the calendar year following her victory at the CJGA Western Canadian Championship in March. Arora, a member of Team Canada’s National Junior Squad, fired rounds of 70, 74, and 76 to earn the top spot on the leaderboard.

“This week was great, my putting was really good the first day and that got me off to a good start,” said the 17-year-old. It built some momentum into the week and overall, my game was in great shape. I had a couple holes today where I didn’t play as good but I figured it out and I finished strong which I’m really happy about.”

Eric Zhao, who finished second at the Golf Canada Junior Squad Selection Camp in 2021 recorded rounds of 73, 71, and 73. The 14-year-old Zhao is also a member of Golf Canada’s National Junior Squad.

“This week I tried to change my mentality a little bit,” said the North York, Ont. native. I tried to have fun throughout the whole week and honestly, if you have fun you’re probably going to play good so that’s a big takeaway from this week. It was definitely successful because I was way more confident over my shots.”

Including Arora, the top eight players in the Junior Girls division have earned exemptions into the 2022 Canadian Junior Girls Championship taking place July 25-29 at The Marshes Golf Club in Ottawa, Ont.

About the NextGen Championships, fueled by JOURNIE Rewards