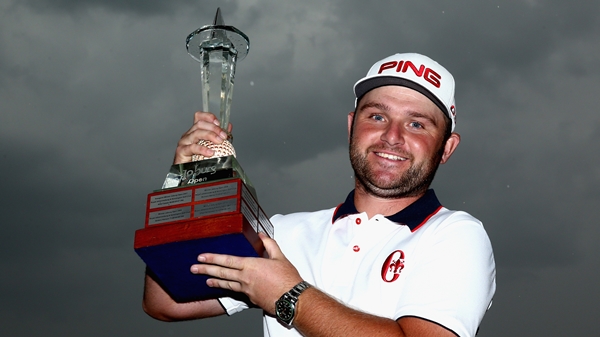 JOHANNESBURG – Andy Sullivan won his second European Tour title in South Africa in just over a month after closing with a 6-under 66 for a 17-under total and a two-shot victory at the Joburg Open on Sunday.

Sullivan’s second European win came in the same city as his first after he won the South African Open in Johannesburg in January.

The Englishman began Sunday three shots behind leader Wallie Coetsee at Royal Johannesburg and Kensington Golf Club, but went top after five birdies in his front nine on the East Course. He only made two birdies on the second nine but that was enough to hold off a big group of chasers down the home stretch.

Sullivan and fellow Englishmen Wall and Howell also claimed the three places at the British Open at St. Andrews that were on offer.

The 28-year-old Sullivan is making a habit of big final-day moves after charging up the leaderboard to beat Charl Schwartzel in a playoff at the South African Open for his first career title six weeks ago.

“It’s unbelievable,” Sullivan said. “I never imagined it would happen again so quickly. Coming down the stretch, me and my caddie were loving life again and enjoying it. It seems to be a theme. (I’m) enjoying my golf and getting the right results at the moment.”

South Africa’s Coetsee was in pole position for his maiden European Tour title after starting Sunday with a two-shot lead, but he could only make three birdies and two bogeys in his 71, his worst round of the week.