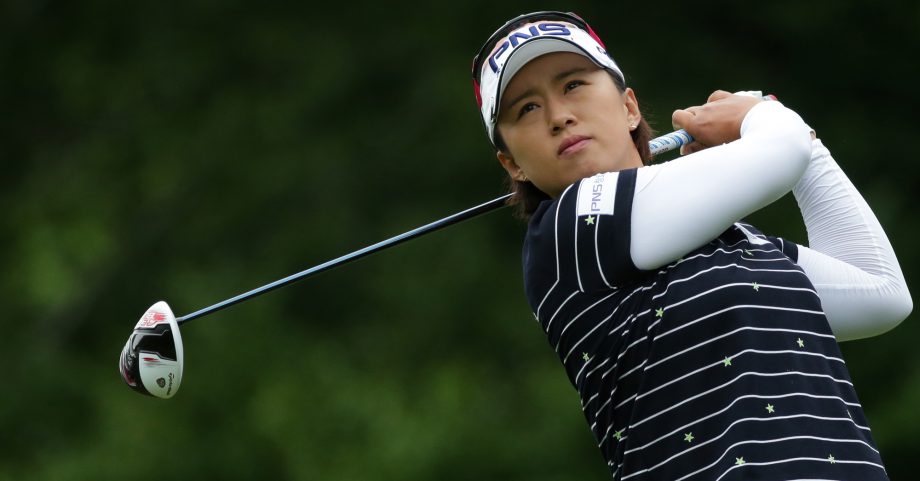 KUALA LUMPUR, Malaysia – Amy Yang took the Sime Darby LPGA Malaysia lead, and Michelle Wie had her best score in more than a year. Lydia Ko had to fight to get back to even par in her first event since firing her caddie.

Yang shot an 8-under 63 _ one off her own course record – in hot and humid conditions Thursday for a two-stroke lead over American Marina Alex. The 27-year-old South Korean player birdied all four par-3 holes at TPC Kuala Lumpur.

“Simple, just keep it simple,” Yang said. “And try to get as much shade as I can.”

Wie opened with a 66, breaking 70 for only the fourth time in 68 rounds this year. Winless in 57 tournaments since the 2014 U.S. Women’s Open, she’s coming off a season-best 10th-place tie last week in China in the Blue Bay LPGA.

“I just had fun out there today,” said Wie, paired with Alex. “I love playing with Marina. She’s a really good friend of mine and she was playing great today, and just kind of feeding off each other’s energy.”

“Really clumsy double,” Ko said. “I hit a great drive and then I just leaked a shot in the water. The rest of the day I was just trying to fight back and put myself in position under par. And I got back into good position and I hit it in the water again. So, that wasn’t good. But obviously to finish up the round with a birdie on 18 was good. To bring it back to even, I think it could have been much worse.”

The 19-year-old New Zealander fired Jason Hamilton, the Australian who caddied for her since late 2014, and is using Malaysia’s Sargunan Suntharaj this week. Hamilton shifted to Ha Na Jang and helped the South Korean player open with a 69.

Feng had 10 birdies, watery double bogeys on Nos. 14 and 15 and a bogey. The women are playing TPC Kuala Lumpur’s East Course, a week after Justin Thomas successfully defended his title on the West Course in the PGA Tour’s CIMB Classic.

Yang birdied Nos. 15-17 and nearly made it four in a row on the par-4 18th, only to have her 5-footer graze the right edge. That left her a stroke short of the course record she set in 2013.

“My putting was good,” Yang said. “Just happy to shoot a bogey-free round.”

She has five top three-finishes this season. Both of her LPGA Tour victories have come in Asia, the first in 2013 in South Korea and the second last year in Thailand.

“I do enjoy Southeast Asia,” Yang said. “I’d rather play in this weather than cold weather.”

Wie returned to play last week at Blue Bay after a four-week break.

“Just really just kept my body right,” Wie said. “Just really took time off and really tried to get healthy again. I did a lot of rehab and just practiced and tried to play a lot.”

She also opened with a 66 last year. The American struggled after that a year ago, closing with a 76 to tie for 42nd.

Second-ranked Ariya Jutanugarn, grouped with Ko and fifth-ranked Brooke Henderson, had a 68. The 20-year-old Thai star has a tour-high five victories and leads the money list and the Race to CME Globe and player of the year standings. She was third Sunday in China.

Stacy Lewis shot a 70 in her first event since mid-September. Winless in 60 starts since June 2014, the 11-time tour champion had a triple bogey on the par-4 11th. She has 11 runner-up finishes during the drought.

Henderson also had a 70. The 19-year-old Canadian is playing for the fifth straight week in Asia and plans to make it six in a row next week in Japan in the Asia finale.

Defending champion Jessica Korda shot 71. She was second in China.