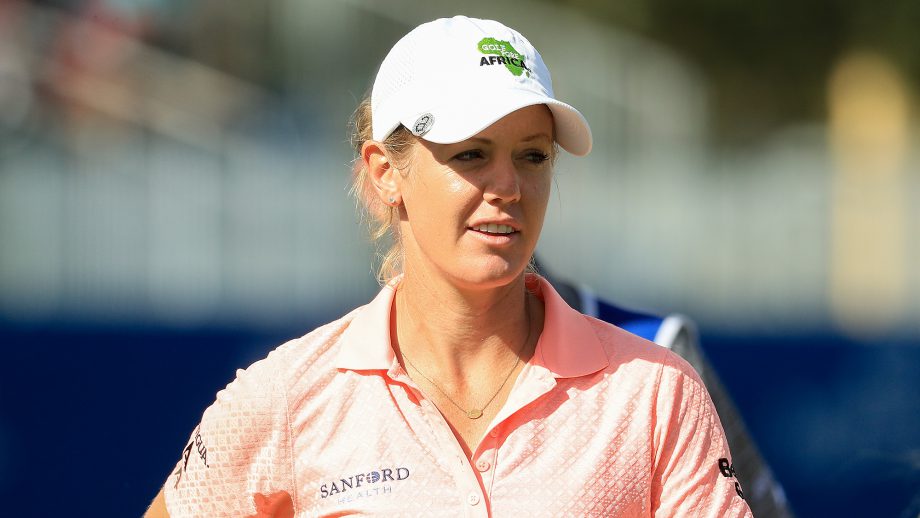 NAPLES, Fla. – Amy Olson had a simple explanation for her brilliant start at the CME Group Tour Championship.

“I don’t have any bad memories,” she said.

Playing the LPGA’s season-ending event for the first time, Olson was flawless with nine birdies and no dropped shots on her way to a 9-under 63 and a one-shot lead over Brittany Lincicome and Nasa Hataoka after Thursday’s opening round.

Olson had two separate streaks of four consecutive birdies on what became an ideal day for scoring at Tiburon Golf Club. Of the 72 players in the field, 45 were under par following the opening round – and the top four women on the leaderboard combined for only one bogey. Lincicome was short with her approach on the par-4 18th, and dropped a shot to end her day.

“It’s just fun to be playing well,” Olson said. “It’s always a good feeling. I had a lot of like perfect numbers in today. Rolled the ball really well. Always fun to play well.”

Lincicome started with five straight birdies to get her day rolling, and Hataoka enhanced her chances of winning the Race to the CME Globe and $1 million bonus with an eight-birdie outing. Lexi Thompson had five birdies and an eagle to card a 7-under 65, enhancing her bid for what would be her first and only win of 2018.

Lincicome said she played earlier this week with two young girls, and they reminded her how simple the game can be sometimes.

This event will decide the year’s LPGA scoring champion, as well as the winner of the Race to the CME Globe and the bonus that brings.

There are five women with the simplest path to that trophy – world No. 1 Ariya Jutanugarn, Minjee Lee, Sung Hyun Park, Brooke Henderson of Smith Falls, Ont., and Hataoka would all win the Globe by winning the tournament. But on a day where many went low, four of those five players didn’t really get into the birdie barrage.

Jutanugarn was 1 over after four holes, then rallied a bit to shoot a 2-under 70. Lee also finished at 2 under, Park was at 1 under, while Henderson was tied for last in the 72-player field at one point and wound up carding a 73 – aided by three birdies in her final five holes of the day.

Jutanugarn knew what she needed to do after finishing the opening round.

“Work on my tee shot,” she said, “and hope tomorrow is going to get better.”

The mover in that group of five was Hataoka. If the order of finish Sunday were the same as it was when Thursday’s play ended, Hataoka would walk off with the Globe.

She already has an idea how she wound spend the bonus.

“Seeing all the houses on the golf course really inspires me to want one of those,” Hataoka said.

Thompson won the Globe last season – she’s not in the group of 12 women with a mathematical chance of doing so this year – but has a pair of top-four finishes at the season finale in the last three years. She hasn’t won yet in 2018, but felt a decent round was coming.

“It’s only the first day,” Thompson said. “I’m just trying to take it one shot at a time, but it was nice to have a day like this. I knew my game was there.”