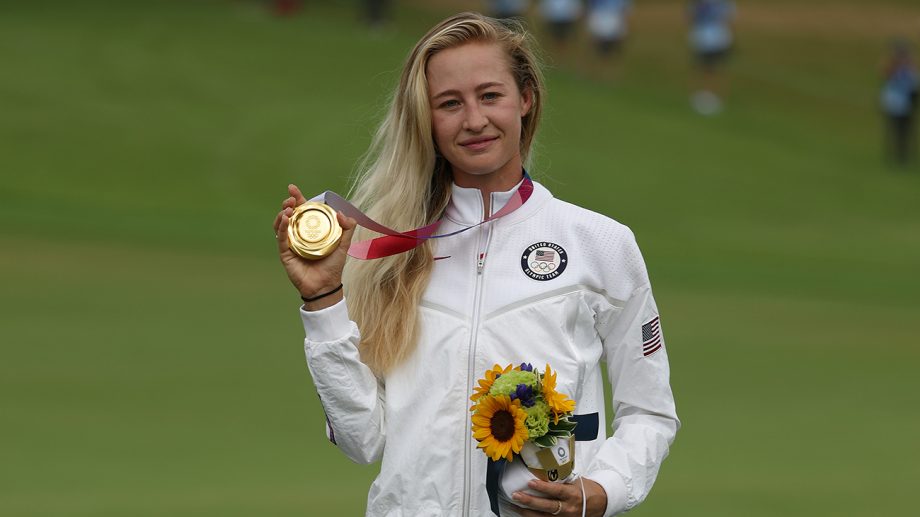 KAWAGOE, JAPAN - AUGUST 07: Nelly Korda of Team United States celebrates with the gold medal at the victory ceremony after the final round of the Women's Individual Stroke Play on day fifteen of the Tokyo 2020 Olympic Games at Kasumigaseki Country Club on August 07, 2021 in Kawagoe, Japan. (Photo by Mike Ehrmann/Getty Images)
Golf Canada

Korda had held the tournament lead since the second round when she carded a 9-under 62, and was able to stay ahead with consecutive rounds of 69 to finish the tournament at 17 under.

Inami and Ko both finished the tournament at 16 under, forcing the silver and bronze medals to be decided by a playoff.

Inami defeated Ko on the first hole of the playoff, the par 4 18th hole.

Ko also won a silver medal at the Rio 2016 Olympics.

Canadian Brooke Henderson of Smiths Falls, Ont., finished tied for 29th at 4 under after putting in a final round 67, her lowest round of the tournament. Alena Sharp of Hamilton finished 49th at 5 over.

“Yeah, I’m really excited to be a two-time Olympian and to be able to compete here this week,” said Henderson. “I feel like playing in the Olympics for golf is huge, just such a big stage and feels like it reaches a lot more people which is really exciting and hopefully the future is bright for Canadian golf and all around the world.”