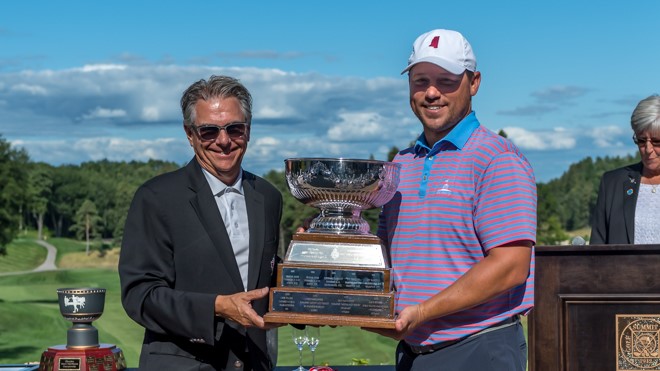 The Belden, Miss., product carded a final round of even-par to defend his Canadian Men’s Mid-Amateur Championship, earning an exemption into the 2020 RBC Canadian Open.

“I didn’t hit it very well,” said Deraney. “I was getting tired – my legs are hurting. I had a couple of incredible up-and-downs that kind of helped save the round. I was pretty steady.”

Deraney, 36, started the final round at Summit Golf Club in a tie for the lead with Garrett Rank of Elmira, Ont. He was able to rebound from back-to-back bogeys on holes No. 5 and No. 6 to win the championship by one stroke.

Deraney took the lead on the par-5 No. 16 with a birdie. Rank held a four stroke lead on the front-nine, but had bogeyed the two previous holes. With the birdie giving Deraney a one-shot lead, the two golfers parred the rest of the holes down the stretch. Rank had a 15-foot birdie putt on the par-4 18th to force a playoff, but missed it to the right.

This is Deraney’s second straight year earning an exemption into the RBC Canadian Open. He played the tournament in 2019, missing the cut.

“I’m pretty stoked about that,” said Deraney. “The field was so good last year. The golf course was so good. Getting to hit balls next to major champions was a once in a lifetime experience…I thought.”

Rank finished the championship at 5-under-par with a final round of 1 over 72.

Charles Fitzsimmons came in third place at 2 under for the tournament, carding a final round of 3 over. The longtime member of the Western University men’s golf team has finished in the top-five of each of the past three Canadian Men’s Mid-Amateur Championships.

Philip Arci of Vaughan, Ont., finished at 1 under in fourth place, while Mike Aizawa of Richmond, B.C., rounded out the top-five at 1 over.

Derek Meinhart of Mattoon, Ill., won the 40-and-over Mid-Master division with a 72-hole score of 4 over. Meinhart carded a final round of 2 under, making six birdies to win the division by two strokes.

“I’ve been hitting it really well all week, but I haven’t been making putts,” said Meinhart. “Today I got a few to fall. I enjoyed this golf course all week and the challenge that it brought. This is my fourth year [playing the Canadian Mid-Amateur]. I enjoy it and look forward to it every year. I brought the family this year, so we had a great time.”

Meinhart was Deraney’s caddie when the latter played the RBC Canadian Open in 2019, and Deraney is planning on having his countryman on his bag again in 2020.

Mike Dinner of Burlington, Ont., finished runner-up in the Mid-Master division at 7 over, while Ryan Kings of Kitchener, Ont., came in third at 9 over.