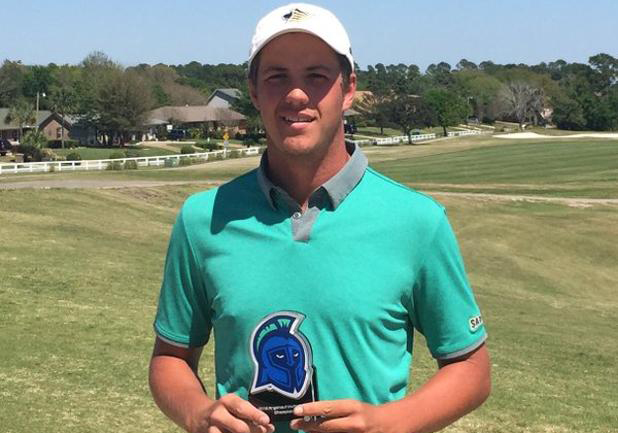 GULF BREEZE, Fla. – Team Canada Amateur Squad member Hugo Bernard continued his red-hot play on Tuesday, rallying with a final-round 70 (-2) to close out the come-from-behind victory at the Argonaut Invitational.

The Mont-St-Hilaire, Que., product surged up the leaderboard following Monday’s second round at Tiger Point Golf Club, firing a tournament-low 66 (-6) on the day to leapfrog 17 spots up the leaderboard and put him in the driver’s seat for the win.

With his first collegiate victory in sight, Bernard’s final-round 70 was enough to shut the door on the competition and build a three-stroke cushion over second place.

The win highlights a string of impressive results in Bernard’s freshman campaign with the Div II Saint Leo Lions. Prior to Tuesday’s victory, the 21-year-old rattled off three consecutive Top-5 finishes in just four events on the squad.

“Hugo’s been working extremely hard on his game and is progressing nicely,” said Derek Ingram, Team Canada Men’s Head Coach. “I’m really pleased to see that all of his hard work is paying off with some great results across the board.”

Bernard, last year’s Canadian Men’s Amateur runner-up, will look to continue his streak when the Lions tee-it-up next at the Sunshine State Conference Championship from Apr. 17–19.