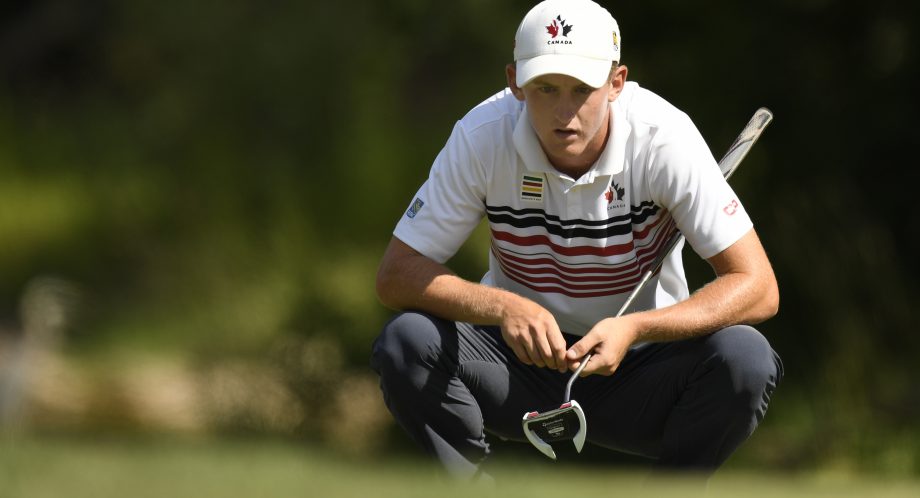 The amateur from Kimberley, B.C., had the best view, of course, of his 40-foot putt for eagle on the 18th hole. The shot helped move him to 2-under par on Saturday afternoon and into a tie for second at the RBC Canadian Open.

His caddy Sean Burke – who met du Toit for the first time on Monday – was next, rushing to hug the 21-year-old on the green as the fans started to cheer. The hundreds of supporters who’d endured the relentless heat on the baked hills surrounding the bunkered green at Glen Abbey Golf Course got to their feet and started clapping, most of them with their hands above their heads.

Spain’s Jon Rahm, who was teammates with du Toit at Arizona State University, had stayed to watch his long-time friend finish his round and started jumping up and down and shouting.

Finally, as du Toit started the steep climb up to the official scorer’s trailer, the fans started singing. Straining to be heard over the cheers and applause, a growing section of fans belted O Canada.

“Unbelievable,” said du Toit. “The atmosphere out here has been unbelievable. Walking to each green, each tee box, everybody hooting and hollering ‘Go Canada!’

On Sunday, du Toit will be in position to end both droughts.

When asked if he could win the tournament, du Toit puffed out his cheeks and loudly exhaled.

“I have no idea. I’ve been surprising myself all week,” he said. “If I play good, solid golf, get a good night’s sleep, do all the little things right, yeah, I like my chances.”

He’ll be in the top pairing with American Brandt Snedeker in the fourth and final round. Snedeker had a seven-foot eagle on the same hole about an hour before du Toit overshadowed him.

Snedeker shot a 6-under 66 to move 15 spots up and take sole possession of the lead at the PGA tour event at nine under.

“I think I’m going to be the most hated man in Canada tomorrow, but it’s going to be a lot of fun trying to figure it out,” said Snedeker, who had yet to meet du Toit. “For a 21-year-old kid to be playing golf here is awesome, let alone to do it in your national open.

“I mean, I can’t imagine the nerves this kid has to be playing as great of golf as he has.”

Dustin Johnson (71) started the day as the co-leader with Luke List, but took a step back to sit at eight under with du Toit. American Steve Wheatcroft and Germany’s Alex Cejka were tied for fourth, two shots behind Snedeker.

List struggled in the top pairing with Johnson, carding a 5-over 77 to drop from first down to a tie for 28th.

Johnson drained a birdie putt on the 18th hole to salvage his day somewhat, finishing 1-under 71 on the day.

“I had a rough day on the greens,” said Johnson, ranked No. 2 in the world. “It didn’t feel like I was hitting bad putts. I don’t know, ball was not going in the hole.

“You know, tomorrow, hopefully get some putts to roll in.”

Rahm, who was tied for third with du Toit at the start of Saturday’s third round, shot par to remain at 6-under par and stay in contention in a group tied for sixth.

Canada’s Jared du Toit sits a shot back headed into the final round of the #RBCCO.https://t.co/Zld9AMM4zR