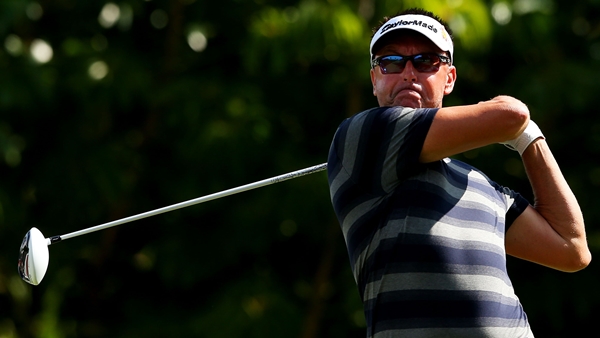 HONOLULU – His left eye bruised and swollen shut, Australian golfer Robert Allenby is still shaking over a beating and robbery that left him unable to remember anything except being dumped in a gutter near a park of homeless people.

“You think … that happens in the movie, not real life,” Allenby told The Associated Press by phone Sunday. “I’m just happy to be alive.”

Allenby posted a photo to his private Facebook account showing a bloodied scrape on his forecast and the bridge of his nose. He said that came from being tossed from the trunk of a car. He said the bruise on his left eye must have come from being beaten in the car.

“I don’t know what they hit me with between the eyeballs, whether a fist or a baseball bat,” he said. “Whatever it was, it hurts.”

Allenby missed the Sony Open cut and then went to Amuse Wine Bar in Honolulu on Friday night with his caddie and a friend from Australia. He had been to the bar earlier in the week, thought it was a trendy spot and wanted to try the restaurant. Allenby remembers having dinner, a few glasses of red wine and that was about it.

Even after he returned to the bar on Saturday with police and watched tape from a surveillance camera that showed him leaving with four people, he doesn’t know who they were or even leaving the bar. Allenby said he has no recollection until getting kicked and prodded by homeless people searching for whatever he had left.

Allenby said his wallet, cash, driver’s license, PGA Tour badge and cellphone were taken. All he had on him in the gutter were two receipts, the American Express card to pay for dinner that he put loosely in his pockets and a watch.

Allenby said he was checked out by the doctors, but he did not have a blood test to determine if he was drugged.

“I did ask to get a blood test, but they said it was probably out of your system,” he said.

The Honolulu Police Department did not return repeated calls. TV station KHON2 in Honolulu reported Saturday that the matter was being investigated as second-degree robbery.

The image of Allenby’s face, which he posted to Facebook, was a jarring image in the middle of a golf tournament. Webb Simpson ran into Allenby went he got back to the hotel last night.

“I could believe what happened to him,” Simpson said.

Allenby said surveillance cameras showed his friend Anthony Puntoriero talking to someone in the bar.

“I think that was a decoy, a distraction,” Allenby said. “I went to the bathroom, came out of the bathroom and was told that Anthony had left and was downstairs waiting for me. I go downstairs and then, bang! They knock me out and take me six or seven miles away.”

He said the tape showed one man put a hand on Allenby’s shoulder.

“I seriously don’t even remember meeting these people,” he said. “That’s what is weird. All I know is that I was walking very quietly with them and normal. It didn’t make any sense at all.”

Allenby said a homeless woman told him he was thrown out of the car, but the ordeal wasn’t over just yet. He said several homeless were “kicking me to see if I was alive, and then trying to steal everything else from me.”

He said a man who said he was in the Army came to his aid. Instead of calling an ambulance or the police, Allenby said he wanted to go back to the Kahala Resort at Waialae Country Club because “I just wanted to be in a safe place.”

Allenby said he called daughter Lily, who turned 13 on Saturday, and she was sobbing.

He said his body felt fine except for the swollen left eye and scrapes on his face. He was hoping to make his flight Sunday night to Los Angeles, and then he would decide if he was fit to play the Humana Challenge next week in La Quinta, California.

Allenby has 22 wins worldwide, including four on the PGA Tour, the last one in 2001. He has played in the Presidents Cup six times.

“I’m still shaking, still scared,” he said. “It’s just so surreal, just amazing. How does that happen to me? I went from one area where I could have died to another area where I got dumped and homeless people are trying to mug me even more. Sometimes we’re all naive. We only think this happens in the movies.”