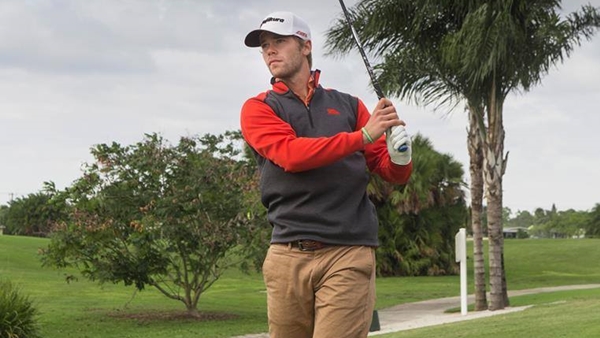 BEAUMONT, Calif. – France’s Aléxis Anghert shot a 6-under 66 Thursday at Oak Valley Golf Club to take a one shot lead into the final round of PGA Tour Canada’s California Qualifying Tournament.

The 26-year old Quebec City resident will take a one shot advantage over England’s Greg Eason into the final round of the 72-hole competition that will see 18 players earn exempt status on PGA Tour Canada for 2014, with the rest of the top 40 plus ties earning conditional status. The cut-off through 54 holes for exempt status stands at 4-under par, while the number for conditional status stands at even par.

“I played really well the first nine holes,” said Anghert, who hit approaches to tap-in range on the first two holes of an opening-nine 32. “The putts didn’t go in on the back nine, but I was playing so good.” Anghert caught Eason, the 36-hole leader, after the first two holes and would card birdies on his 16th and 17th holes to take a one shot lead into Friday’s final round.

“It’s a long day and I was getting pretty tired, but I’m excited tomorrow. I’m in a good position to try and go for the win, which would be nice.”

Anghert, who moved to Quebec to play at Laval, is looking to join former Rouge et Or teammate Max Gilbert, who won the TOUR Championship of Canada presented by Freedom 55 Financial last season, on PGA Tour Canada. Sonny Michaud, another Laval grad who helped the team win the Canadian University/College Championship in 2012, shot a 2-under 70 to move into a tie for 40th spot, in position to earn conditional status for 2014.

Michaud and Hamilton, Ont.’s Justin Kim, who shot a 2-over 74 to sit tied for 32nd at 1-under total, led the Canadian contingent of players in position to earn PGA Tour Canada status for this year.