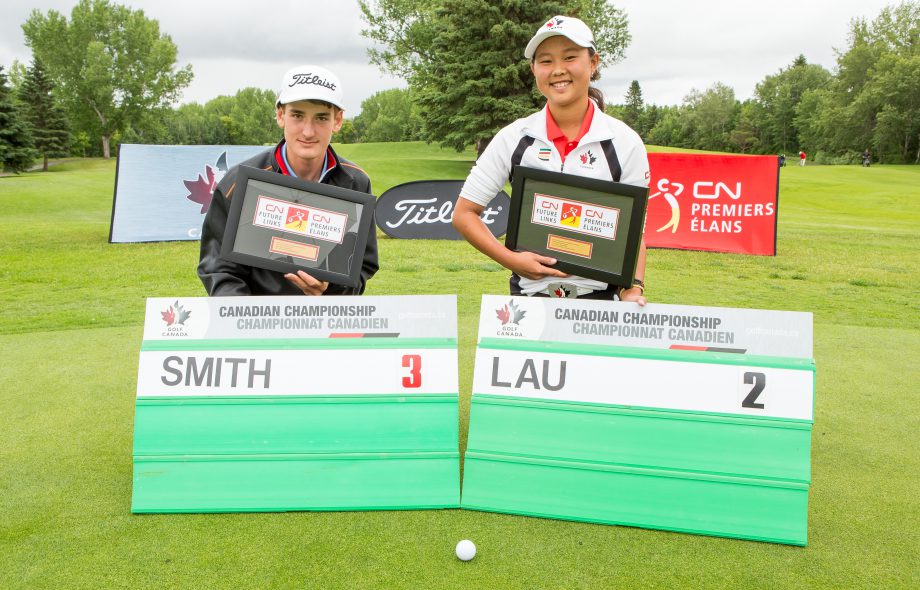 It was another rainy day at Cooke Municipal Golf Course in Prince Albert, Sask., for the final round of the 2015 CN Future Links Prairie Championship. The conditions were challenging and the competition was tight, but Alexander Smith and Alisha Lau emerged victorious in the season’s third CN Future Links Championship.

Alexander Smith entered the final round sporting a 5-stroke lead, but a tough start and a strong push from his competitors threatened his attempt at a wire-to-wire win. The Calgary, Alta., native found his form and shot 2-under 34 on the back nine to secure the victory. He signed for a 1-over-par 73 to claim the championship title and finish the 54-hole competition at 213.

“I didn’t start off very smooth, I made a few bogeys. I had a birdie on three and didn’t make my first par until five, but I felt I got it back together on the back nine,” said Smith of his slow start. His steadier back nine reaffirmed the 16-year-old’s confidence in his abilities. “This win further proves to me I can compete with anyone and compete at the top of the leaderboard.”

On Smith’s heels were British Columbia runners-up Logan Yanick of Courtenay  and A.J. Ewart of Coquitlam who finished two strokes back of the winner. They both shot 1-under-par 35 on the front nine, but their concerted efforts in the latter half of the round truly challenged the leader. Yanick notched four birdies between holes 12 to 16; Ewart added three birdies on the back nine to post the low score of the day – a 3-under-par 69. Tying Ewart for the day’s low round was Cory Selander. The Prince Albert, Sask., native climbed into a tie for fourth place at 219 with Keaton Gudz of Victoria, B.C.

“Last year Jaclyn won, she is a close friend and a close competitor and to have my name next to hers after winning is really nice,” Lau shared. “It has shown me that it is still early in the season and I just have to keep fighting and anything can happen.”

The Richmond, B.C., product credited her strong start when reflecting upon the victory. “I had a pretty good start on the front nine, I was 2-under and I hadn’t made a bogey so I was cruising along pretty well, but the back was a little bit bumpier. I had to start grinding pretty hard. Mary was putting up a really good fight and it’s not over until it’s over.”

Lau’s first bogey of the day came on hole 15. By the 18th, Mary Parsons had climbed to within a single stroke – reclaiming the distance at which she had begun the day. Lau drained her putt for par on the final hole to secure the win and record her lowest round of the competition with a 1-under 71 to finish at 218.

Parsons, who finished a stroke back of the lead, also carded a score of 71 for the final round, including just two bogeys and a trio of birdies. In third place at 6-over 222 was fellow British Columbian Shirin Anjarwalla of Nanaimo who concluded the competition with an even-par 72 round.

Earning direct entry into the field at the 2015 Canadian Junior Girls Championship are Alisha Lau and the five runners-up from the CN Future Links Prairie Championship. The national championship will be contested at Deer Park Golf Course in Yorkton, Sask., from August 4-7. With the win, Lau has also earned an exemption into a future event on the Canadian Women’s Tour.

Alexander Smith and the second to sixth place finishers from the CN Future Links Prairie Championship have punched their tickets to Vaudreuil-Dorion, Que., to compete in the 2015 Canadian Junior Boys Championship hosted by Summerlea Golf and Country Club from August 2-6.

The six 2015 CN Future Links Championships are presented by Golf Canada in partnership with CN to support the growth of junior golf in Canada. Trevor Ranton and Grace St-Germain – both members of Team Canada’s Development Squad – claimed victories at the series-opening Pacific edition. Ontarians Jack Simpson and Alyssa Getty were crowned winners in their home province’s edition of the series. Up next on the schedule is the CN Future Links Quebec Championship to be played July 2-5 at the Domaine Château-Bromont, in Bromont, Que.

Full results and additional information on the 2015 CN Future Links Prairie Championship can be found here.