Alena Sharp sits a shot back at ShopRite LPGA Classic 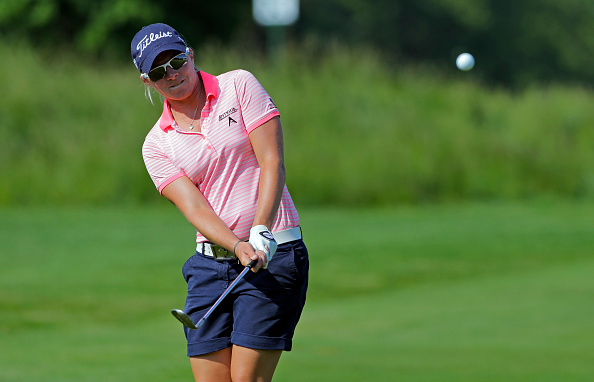 – Morgan Pressel wasn’t thrilled with the first 16 holes she played Friday in the first round of the ShopRite LPGA Classic. Her final two holes really improved her demeanor.

A birdie-eagle finish gave her a 5-under 66, good enough to top the leaderboard in near-perfect conditions on Stockton Seaview’s Bay Course.

“I really didn’t put myself in a whole lot of trouble,” Pressel said. “I wouldn’t say that I certainly had the best game out there. I guess I just made a few mistakes, and I didn’t play all that well, but then I came down birdieing eighth and eagling the last hole. That definitely helps.

“I only made two bogeys. They weren’t great bogeys by any means. I shouldn’t have really made them, but hopefully I can eliminate those kinds of mistakes and can keep giving myself opportunities.”

“I didn’t honestly know where it was,” Pressel said about her second shot at No. 9. “I thought it might be short of the green. I couldn’t see it and nobody clapped so I had no idea. Then we came up far enough over the hill to where we could see it and I was like, `Oh, it’s right next to the hole. OK, I’ll take it.'”

Pressel became the youngest player to win a major in the 2007 Kraft Nabisco at 18 years, 10 months and 9 days old. But she has won just one other victory on the tour, the 2008 Kapalua LPGA Classic.

She came close to breaking that drought last month at the Swinging Skirts LPGA Classic in California, but lost on the second hole of a playoff with top-ranked Lydia Ko.

Nordqvist, who had a streak of four top-10 finishes earlier this season, birdied her final hole, the par-5 ninth, with a 4-foot putt.

“Morgan is a very good player,” Nordqvist said. “Her short game is amazing, and she’s a very feisty player. Once she gets hot, she gets really hot. I think she is riding some confidence. She’s been playing great.”

Lee, who entered this week coming off three straight missed cuts, had an eagle and three birdies on the front nine to make the turn at 5 under.

O’Toole birdied her last two holes to get to 4 under, and Sharp’s round was highlighted by an eagle.

Michelle Wie had a 74. The U.S. Women’s Open champion is playing after withdrawing from the Kingsmill Championship two weeks ago because of a left hip injury. She went through a series of evaluations and MRIs and was diagnosed with bursitis.