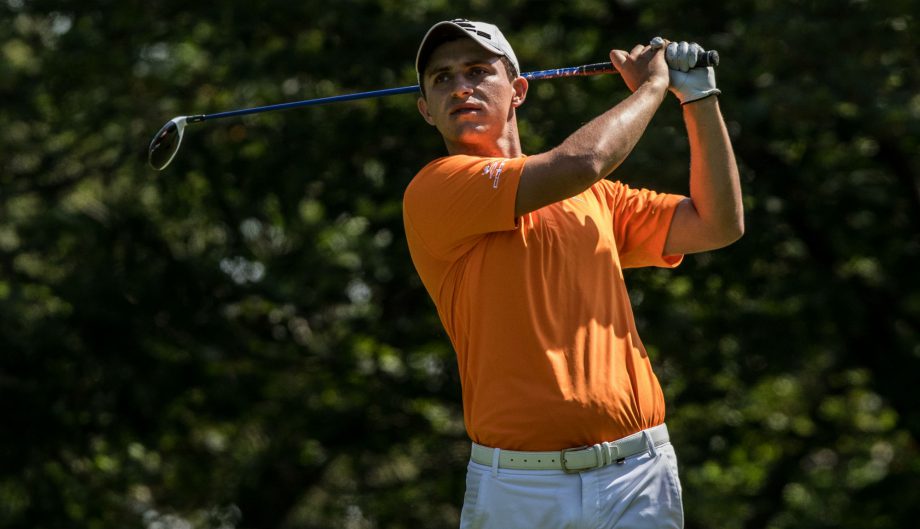 Camilo Aguado pulled out to a one-stroke lead after he shot an even-par 70 during the third round of the Canadian Men’s Amateur Championship at The Toronto Golf Club on Wednesday.

The 23-year-old Colombian carded three straight birdies on holes six, seven and eight to lead by as much as three strokes, but a triple-bogey on No. 16 limited his lead to one heading to the final round of the championship.

“I’m happy, leading by one heading to the last round,” he said, after making par on the 18th hole. “But I made a stupid mistake on 16, I shouldn’t have used my driver. I still feel good because I made three straight birdies on the front nine. I missed a couple chances on the back, but I also made some good saves, so it all worked out.”

Aguado headed to the first tee coming off two bogey-free rounds on Tuesday and Wednesday – the only two of his competitive career – and promptly hooked his opening tee shot left of the fairway, eventually making his first bogey of the tournament.

“I hit a really bad tee shot because I was a little bit nervous,” he said. “Then I hit a bad chip and missed my putt and that’s that. It had to happen at some point but I made a birdie on the next hole so it was alright.”

Bernard, the defending champion and member of Team Canada’s National Amateur Squad, shot a 1-over-par 71 to secure his spot in the final grouping, one-stroke back of Aguado.

Thursday will mark a familiar position for the 22-year-old from Mont-Saint-Hilaire, Que. In 2016, Bernard entered the final day of the same championship three strokes back of Blair Bursey (Gander, N.L.) and ended up shooting a 5-under-par 65 to win the event by two-strokes.

“I like to be the chaser, so I love where I am,” Bernard said. “I just need to play my game – if I can stick to that I know I will have a chance to win tomorrow.”

Despite sitting near the top of the leaderboard, Bernard hasn’t felt like he has been playing his best golf and has been relying heavily on one facet of his game.

“It was a grind just like yesterday – a rough day from every part of my game except from my short game,” he said. “The short game saved me today and I’m happy with the score.”

His wedge work didn’t go unnoticed by his playing partners.

“Hugo really showed how to score well without hitting it well,” said Aguado. “If I shot like that I’d be submitting a 76 or something like that. He was just hitting amazing chips all day long.”

Tied with Bernard at 6 under par are Americans Zach Bauchou and Stratton Nolen.
Bauchou, from Forest, Va., shot the lowest of the top four after he carded a 2-under-par 68 and moved himself to the final grouping. The 21-year-old made the turn at 1 over par but went bogey free down the stretch with three birdies.

Nolen, who was coming off a second-round start that saw him register six birdies in his first six holes, shot a 71 on Wednesday. The Austin, Texas, native opened his round with a birdie but made the turn at 1 over after bogeys on holes seven and eight.

He will tee off the final round with Matt Williams (Calgary, Alta.), and Josh Whalen (Napanee, Ont.) in
the second-last group.

In addition to claiming the title of 2017 Canadian Men’s Amateur champion, the winner will earn exemptions into the 2017 U.S. Amateur at The Riviera Country Club in Pacific Palisades, Calif., and the 2018 RBC Canadian Open at Glen Abbey Golf Club in Oakville, Ont. The champion will also be exempt from U.S. Open Local Qualifying and, if applicable, eligible to receive an exemption into the U.S. Junior Amateur, the U.S. Mid-Amateur or the U.S. Senior Amateur.