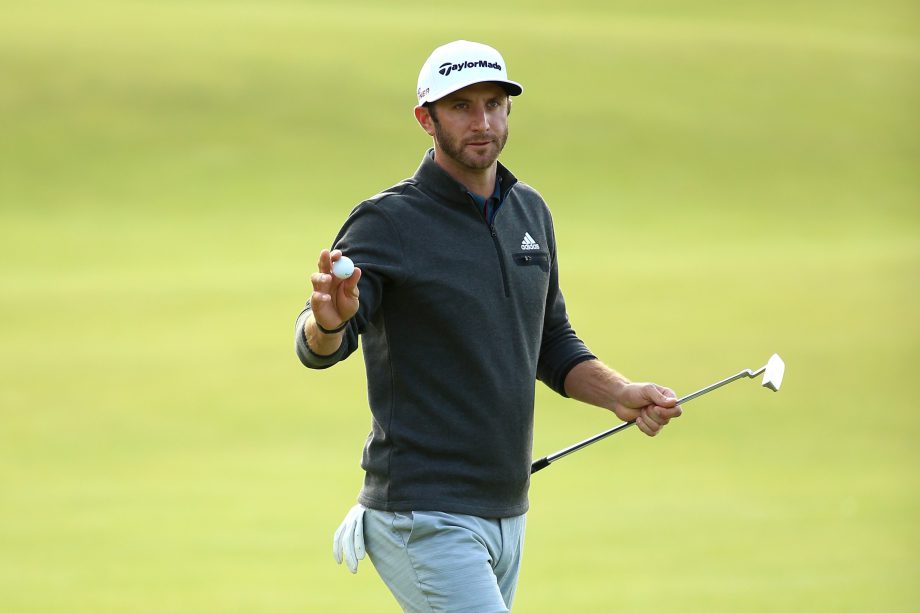 ST. ANDREWS, Scotland – Even with 155 years of history, the British Open can still serve up some strange twists at St. Andrews.

The second round lasted nearly 39 hours from the first tee shot to the final putt. Brooks Koepka hit one putt in 30 minutes, and he might still be on the 11th green except that he refused to keep going because his golf ball wouldn’t stay put. Jordan Spieth, who won the Masters and U.S. Open on the strength of his great short game, three-putted five times in one round and still kept alive his hopes of a Grand Slam.

If that wasn’t enough, 40 mph gusts that led to a 10 1/2-hour stoppage meant the British Open will end on Monday for the first time in 27 years.

For all the chaos on the Old Course, and for all the debate whether play should have even started Saturday because of the wind, Johnson only cared about the finish. He drove the 18th green and took two putts from 150 feet for birdie and a 3-under 69.

That gave him a one-shot lead over Danny Willett of England, who for the second straight year did not hit a single shot in the British Open on Saturday. Last year it was because he missed the cut. This time it was because he finished his second round Friday.

Not so unusual – at least not now – was Tiger Woods. He missed the cut for the third time in the last four majors.

One month after a three-putt from 12 feet cost him a shot at the U.S. Open, Johnson walked the Old Course with a swagger. He did enough damage over 13 holes Friday that even a couple of bogeys didn’t get him off track, and he showed in the short time he played Saturday he could handle the wind.

“Every aspect of your game is challenged,” said Johnson, who was at 10-under 134.

Paul Lawrie, the 46-year-old Scot who won a crazy Open at Carnoustie in 1999, played bogey-free over the final 14 holes for a 70 and was two shots behind. Louis Oosthuizen (70) and Jason Day (71) joined the large group at 7-under 137 that included Adam Scott and Zach Johnson, who finished Friday.

Spieth, going after the third leg of the Grand Slam, shot 72 and was five behind.

As gusts began to top 40 mph when the second round resumed in the morning, Johnson chose to chip up the steep slope at the front of the par-5 14th green. He didn’t hit quite hard enough. And then, the player with a reputation of being it too much of a hurry at the majors made the mistake of taking his time. An inch away from placing his coin behind the ball to mark it, a gust moved his ball and it picked up enough momentum to roll off the green and cause Spieth race toward his ball and then jump out of the way.

“My coin was about to hit the ground when it took off,” Johnson said. “Then I went to mark it again, and it took off again. And then Jordan was running to his ball. It was pretty funny. I was laughing at him. I wasn’t laughing at myself.”

Three putts later, Johnson had his second bogey of the week. One hole later, the R&A realized it was too windy to continue.

Johnson returned nearly 11 hours later, made two solid pars and finished with his birdie. It was the fourth time in the last six rounds at the majors that he has had at least a share of lead, though not when it mattered – at the end.

Spieth three-putted for par on the 14th hole and swiped his putter in disgust as leaving two of those putts short. He had another three-putt from about 90 feet on the 17th hole. But he stayed in the game by driving the 18th green for a birdie.

“I believe I’m still in contention. I still believe I can win this tournament,” Spieth said.

But after spending two days playing alongside Johnson, he also realized a third straight major will require some help.

The second round didn’t finish Friday because a burst of heavy rain flooded the course. That was nothing compared with the gusts off the Eden Estuary, and the R&A knew it was going to be on the edge to play. R&A officials said they spent an hour on the 11th green – the most exposed part of the golf course – to make sure golf balls weren’t moving. And then it started, and Koepka’s ball wouldn’t stay put.

He took nearly 30 minutes to hit one putt. He kept marking his golf ball and protesting with a rules official and finally said he wouldn’t play when his ball moved a couple of inches on three occasions. A few holes ahead, Oosthuizen putted up to 3 feet on the 13th. A gust blew it a few feet away and, as the South African laughed at the absurdity, it moved about 8 feet away.

About that time, play was halted and didn’t resume until 6 p.m.

Ultimately, what mattered was the finish.

Just not for Woods. He never had a realistic chance of making the cut. Needing mostly birdies, he resumed his round with three straight bogeys and shot 75 to finish his two rounds at 7-over 151. That was his highest 36-hole ever in the British Open, one month after his highest 36-hole total ever (156) to miss the cut in the U.S. Open.

Graham DeLaet recorded a second-round 73 and sits T61 heading into the third round. David Hearn will not being teeing it up tomorrow after rounds of 74 and 73.