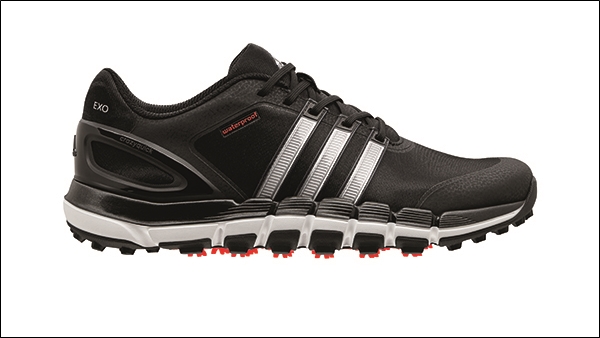 The evolution of golf cleats has seen little change in innovation over the course of the last century. From metal spikes to soft spikes and most recently spikeless models, cleat technology has remained stagnant with little advancement. The adidas Golf team set out to change the state of the footwear game, embarking on a mission to reshape the industry to create a groundbreaking category of shoe for all golfers. The result: adicross gripmore and pure 360 gripmore sport.

Unlike traditional spiked golf shoes that require receptacles to house cleats on the sole, gripmore cleats are directly injected onto lightweight mesh matting inclusive of hundreds of microspikes for even more traction and stability. In addition to unbelievable grip, both models are among the most green-friendly the company has ever created.

The first of two models to feature gripmore technology, the adicross gripmore utilizes 43 gripmore cleats and a total of 243 points of contact for a unique combination of versatility and performance.

Featuring premium sport-styling with modern aesthetics and colors and a premium full grain leather upper, the adicross gripmore line has outstanding comfort and casual crossover appeal that delivers the performance golfers of all types demand.

Justin Rose debuted the adicross gripmore at the WGC-Cadillac Championship in March, where he praised the shoe’s crossover performance characteristics.

“I’m always looking for footwear that provides traction without compromising comfort, style or on-course performance,” he said. “With gripmore, I have the versatility of a spikeless shoe combined with the performance of a cleated shoe. It’s the best of both styles.”

With a more athletically-inspired design, the pure 360 gripmore sport features a waterproof mesh upper with climaproof®, 360WRAP technology and a powerband™ chassis for increased stability. Featuring 23 gripmore cleats and a total of 161 contact points, the shoe provides exceptional traction with the combination of comfort, protection and performance.