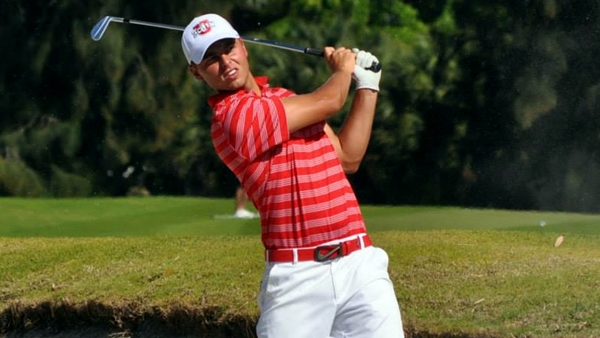 MIAMI BEACH, Fla. – Team Canada’s Adam Svensson has continued his remarkably torrid play this season. The 20-year-old Barry University sophomore won the Buccaneer Invitational Tuesday by a margin of six strokes. Svensson separated himself from the field on Monday’s second round with a two eagle, 10-under 61 – a course record at Normandy Shores Golf Club.

Svensson’s round of 61 was also a Barry University school record – the previous was 64 set by Svensson earlier in the year.

“It was nice,” Svensson said of his second round 61. “I had no idea I was going to shoot 61. I was six-under after 15 holes and had two par 5s left. I eagled 16, parred 17 and on 18 my assistant coach came up to me and asked me where I was at and I said eight-under, but I told him I was trying to make birdie to get the course record. He said, ‘why not eagle’ and I hit it to 10 feet and made the eagle putt.”

The Surrey, B.C., native is currently ranked No. 44 in the World Amateur Rankings (WAGR). He is still carrying the momentum from winning last year’s Phil Mickelson award, given to the most outstanding freshman in Men’s Div II golf. He is also making a strong case to win this year’s Jack Nicklaus award as the top golfer in his division.

Svensson’s scoring record this season is a school record 1.77 strokes under par, earning him a nod from Barry University as the player of the week.

Collectively, the Barry Buccaneers won the event by 22 strokes over runner-up Johnson & Wales University. They were the only team to shoot under par for the tournament and also maintain the No.1 rank in Men’s Div II Golf.

Svensson and the Buccaneers resume action in a couple weeks at the Sunshine State Conference Championships in Dade City, Fla.

For full results from the 2014 Buccaneer Invitational, click here.