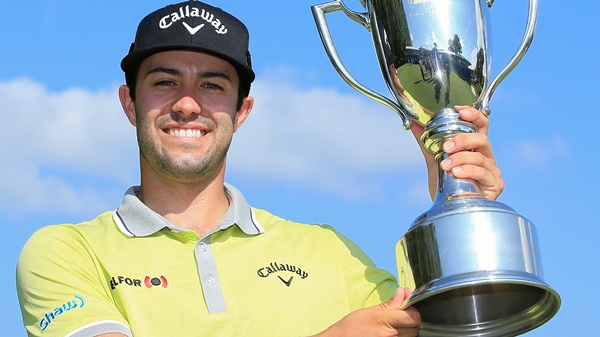 DAVIDSON, N.C. – Adam Hadwin won the Chiquita Classic on Sunday to jump from fourth to a tie for first on the money list after the second of four events in the Web.com Tour Finals.

The 26-year-old Canadian, the Chile Classic winner in March, closed with a 4-under 68 for a two-stroke victory over John Peterson. Hadwin finished at 18-under 270 at River Run.

Hadwin earned $180,000 to push his season total to $473,667. He wrapped a PGA Tour card with his fourth-place finish on the regular-season money list and is competing with the other top-25 players for PGA Tour priority, with the final leader getting a spot in The Players Championship.

Nos. 126-200 in the FedEx Cup standings and Nos. 26-75 from the Web.com Tour’s regular-season money list are playing for 25 PGA Tour cards based on their earnings in the four tournaments.

Peterson shot a 68. He earned $108,000 and has made $127,600 in the first two Web.com Tour Finals events, more than enough to regain his PGA Tour card after finishing 179th in the FedEx Cup standings.

Third-round leader Greg Chalmer had a 75 to drop into a tie for eighth at 12 under. The 40-year-old Australian finished 132nd in the FedEx Cup standings.