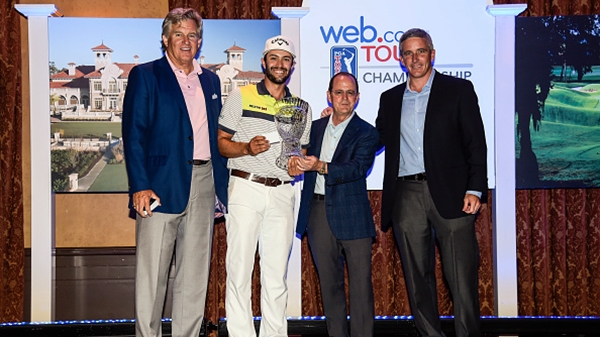 Fathauer finished with a 2-under 68 for a one-stroke victory over Zac Blair. The 28-year-old former Louisville player earned $180,000 for his first professional victory to push his Finals total to $250,133.

“This is unbelievable,” Fathauer said. “I was trying to force it for the first few events. I did a better job of staying patient this week and not looking too far ahead.”

Fathauer has already earned a PGA Tour card with a top-25 finish on the Web.com Tour’s regular-season money list. By topping the Finals money list, he earned fully exempt status for the 2014-15 PGA Tour season and a spot in The Players Championship. He played the tour in 2009, but lost his card after making only eight cuts in 25 starts and wound up losing his card after finishing No. 201 on the FedExCup standings.

“It was tough my first year,” Fathauer said. “I’m not sure I was ready for the tour. I think my all-around game is better now and I’m mentally tougher. I’m ready to give it another try.”

Blair earned $108,000 to secure a PGA Tour card with the 11th position in the Finals priority ranking.

Jason Gore was third at 11 under after a 69. He also earned a PGA Tour card in the regular season, and ended up 10th in the priority ranking.

The Web.com Tour Finals were limited to the top 75 players from the Web.com Tour money list and Nos. 126-200 in the PGA Tour’s FedEx Cup standings. The top 25 on the Web.com money list competed against each other for PGA Tour priority, with regular-season earnings counting in their totals. The other players fought for another 25 cards based on their earnings in the series.

Abbotsford, B.C.’s Adam Hadwin topped the combined Web.com Tour money list to also earn a full exemption and a spot in The Players. The Canadian, also a former Louisville player, had a 72 on Sunday to tie for seventh at 6 under. He earned $30,125 for a total of $529,792.

“I think everyone out here knows the importance of being No. 1 and knows how good it is not to have to reshuffle for the next year,” Hadwin said. “It allows you to just go out and have some fun and enjoy it. You don’t have to put pressure on yourself to perform before the first reshuffle or the second reshuffle.”

He won the second playoff event for his second victory of the year.