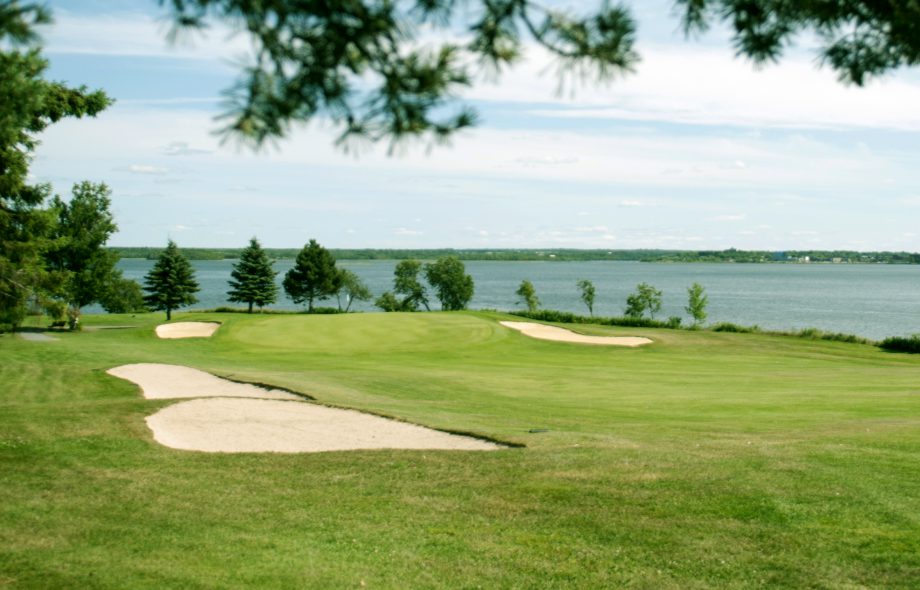 This past fall, after roughly 800 rounds of golf, I witnessed my first hole-in-one. The non-stop flight to the hole touched down on the green a good 10 feet ahead of the target, before beginning a slow, yet steady and methodical, march toward the flag.

Dan Poppers who’d struck the pin-seeking missile had previously bemoaned the ladies seven-iron that had somehow wormed its way into his rental set at Bear Trace at Cumberland Mountain, a beauty of a Nicklaus course an hour west of Knoxville, Tennessee. After finally putting it to good use on the 14th-hole, Poppers was thanking his lucky stars for the club mishap. Still, he miscalculated the extent of his good fortune and missed the magical moment when his ball gently slipped into the jar.

He had figured his rainbow toward the flag was fixing to end up a foot or so short. So Poppers actually had his head down trying to retrieve his tee when it dropped in and he heard us hoot and holler. After Rick, Eric, and myself patted him on the back, Poppers clambered back into his cart and jotted a perfunctory one on his scorecard. He played it off all nonchalant, but this was the first ace this 69-year-old diehard golfer had recorded and nobody was buying the cool as a cucumber act.

When we got back to the clubhouse he was presented with a Bear Trace flag that we all signed and scrawled short messages on with a sharpie to mark the occasion. I wrote: “Poppin’ like it’s hot.” It was then that the enormity of the milestone finally sunk in. When he couldn’t contain his bottled up gusto any longer, he started dialing up his kids and gleefully spilled all the gory details surrounding his glorious one-and-done golf shot.

Just a couple weeks earlier on Sunday morning at The Barclays, Brian Harman airmailed his tee shot on No. 3 priority express into the four and a quarter inch cup 183 yards away. Eleven holes later he gave the gallery at Plainfield Country Club something to really remember by dealing golf’s greatest tee-to-cup parlor trick one more time, carding a 218-yard ace.

Cousin to blue-footed booby bird sightings in the northern hemisphere and buzzer beating full-court swishes in basketball, the one-and-done golf shot is our pastime’s sash-winning spectacle, and a player potting two in one round is almost unthinkable. This was only the third time in PGA Tour history that the mind-blowing deed had been done.

While the tradition calls for a round of drinks at the clubhouse, there’s not much precedent for pulling a twofer so Harman splurged, treating the assembled media to three hundred beers and a bottle of Crown. He cracked wise about it the next day on the Dan Patrick Show: “I wouldn’t wish my bar tab on my worst enemy.”

The odds of pulling a Harman and potting a pair of hole-in-ones in a single round are astronomical. Golf Digest once ball-parked the slim to none occurrence at 67 million to one.

To understand the strange confluence of rhyme, reason, and random acts of green rolling kindness that must conspire together to create an elusive ace, I sought the counsel of a business whose viability is dependent upon translating golf luckiness into actuarial tables.

EPA Ultimate Concepts is a Calgary based prize indemnity specialist that insures thousands of hole-in-one contests every year, running the gambit from $2,500 sink-it-and-win-it challenges on up to million dollar shot life-changers.

“We calculate the odds of an average golfer getting a hole in one in a tournament [on a 150-yard hole for men] at 1 in 15,000,” explains Alan Vinet, EPA’s General Manager.

Now in league play, where players play the same course over and over again, the odds improve to around 1 in 10,000.

In the end, it boils down to being really lucky, and that factor often trumps skillset. “I investigate all the hole-in-ones that happen—I not only sell the insurance but I do the claims investigations. You ask what the handicap of the golfer is and it’s all over the board, ” relates Vinet.

Dealing with as many aces as Vinet does, it takes a lot to surprise him. He’s had ones hit a tree and bounce in, or skip across a pond then carom off a rock and rebound onto the green and snake in. Still his mind has been blown on occasion. One particular $100,000 winner floored him. “It was a shotgun start and this guy had rushed into the tournament and barely had time to tie his shoes.”

Winds were gusting to 60 km an hour and the hole ran along a fence that was out of bounds. He hit four-wood, not exactly a common club, and it was heading out of bounds but the mighty winds blessed his shot blowing it back into play. “It rolled something like thirty yards across the green and hit the pin,” exclaims Vinet.

With just under two decades of insuring golf aces under their belt, EPA Ultimate Concepts possesses unique knowledge of rare outlier courses where chances to make a hole-in-one are the best. Despite my incessant pleading, Vinet would not spill the beans.

“The only thing that I know that [rings true] for people to have more hole-in-ones than normal is that they hook the ball,” explains Stephen Johnston, the founding partner of Global Golf Advisors, a consultancy firm laser focused on public courses, private clubs, real estate and resorts. It was formerly KPMG’s golf practice.

Johnston isn’t just guessing, he’s speaking from experience. Aside from being one of the leading authorities on operational analysis and financial solutions in the golf biz he’s also Canada’s Ace King with a jaw dropping 51 attested hole-in-ones to his name.

Johnston got his ace train chugging when he was 12-years-old, just getting his bearings on the game and shooting in the high 90s. The scene was the 12th hole at Whitevale Golf Club, which plays 145-yards from the white tees and you need to clear Duffin’s Creek and a bunker in front to get on the green. Clutching a 4-iron and playing with his father, who had brought two of his friends along, the moment remains crystal clear in his personal highlight reel.

“To me the ball just went in the hole, I had never played a lot of golf and didn’t really understand the significance. My dad and his friends were more excited than I was.”

When it comes to secrets of his ace prowess, Johnston chocks it up to the aforementioned playing a hook and teeing it up really low, barely off the ground on par 3s. While taking dead aim is important, he likes to factor in roll before picking his target.

“When I was younger I would just aim at the flag,” Johnston explain.

“As I got older, because my shots would always land and roll, I would like to figure out if I needed to be right or left of the pin.”

See, nothing to it.