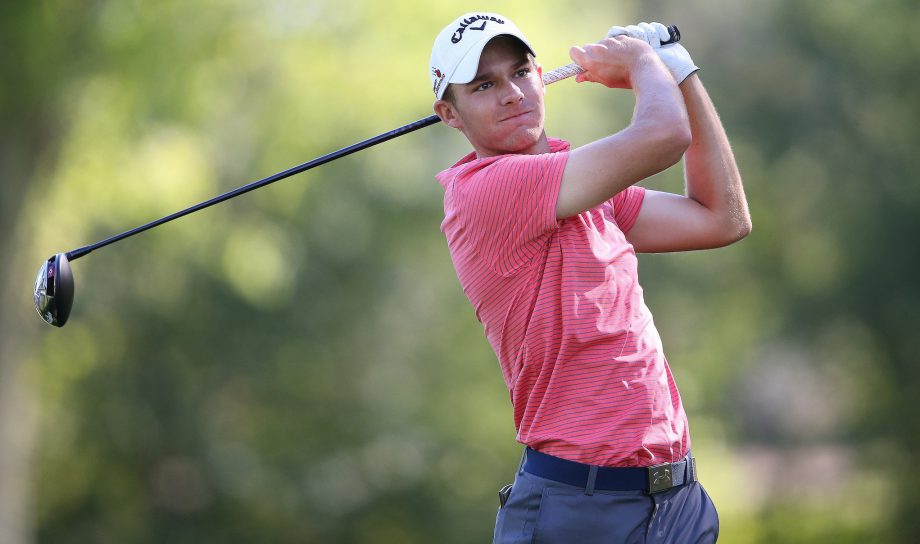 London, Ont. – Lake Elsinore, California’s Aaron Wise shot an 8-under 62 on Thursday at Highland Country Club to take the first round lead at the Freedom 55 Financial Championship, the final event of the 2016 Mackenzie Tour – PGA TOUR Canada season.

The reigining NCAA champion and current Order of Merit No. 5 carded eight birdies, an eagle and two bogeys on the day to lead by one over French Polynesia’s Vaita Guillaume and France’s Paul Barjon after day one at the season-ending event, following which the top five players on the Order of Merit will earn status on the Web.com Tour.

“It was a good day. I made two bogeys en route to that 62, so I had the putter rolling, which I’ve been struggling with the last couple of weeks. It was nice to see some drop early on, and I got it hot when I made the turn,” said Wise.

After a 2-under front nine, the 20-year old caught fire, going birdie-birdie-eagle-birdie on holes 10-13 before recording two more birdies on the way in to reach 8-under.

“It was just really solid. I got off to a bad start with my irons, and I wasn’t giving myself many chances on the front nine. When I made the turn, I started hitting them in the middle and I knew could start doing something because I was rolling the putter well,” said the former University of Oregon star, who captured the NCAA individual title earlier this year while leading the Ducks to their first ever national championship.

At No. 5 entering the week, Wise holds the coveted fifth spot on the Order of Merit. Though Order of Merit leader Dan McCarthy has already secured the top spot on the season-long money list, Wise can move as high as No. 2 ahead of Brock Mackenzie with a win thanks to the increased $200,000 purse for the season-ending event, a target the rookie pro said was on his mind entering the week.

“It’s very volatile with the raised money at this week’s event, and I know can I jump to two if I play well and Brock doesn’t. That’s what I’m looking at, and I’m just trying to focus on playing the best golf I can and let it shake out at the end,” said Wise.

Two shots behind Wise in a tie for fourth were Los Angeles, California’s Jonathan Garrick and Dusseldorf, Germany’s Max Rottluff, who holds the No. 7 spot on the Order of Merit starting the week.