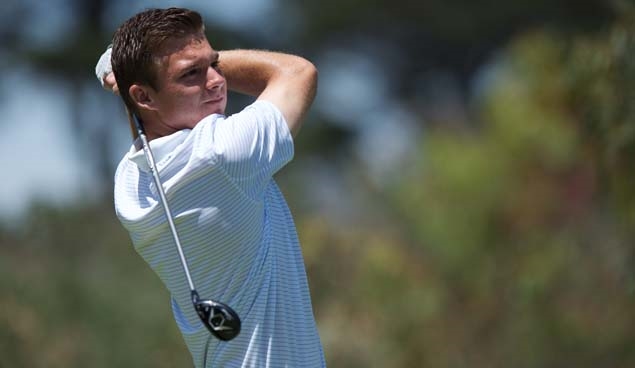 Courtenay, B.C. – California’s Aaron Wise shot a 3-under 69 on Wednesday at Crown Isle Resort and Golf Community to maintain his lead heading into the final round at the Mackenzie Tour – PGA TOUR Canada’s British Columbia Qualifying Tournament.

The 19-year old stumbled to a 1-over front nine, but carded four birdies without a bogey coming in to reach 14-under for the tournament, three shots ahead of Dallas’ Conrad Shindler and San Antonio’s Jeff Rein with one round to go at Crown Isle.

“I didn’t have my best stuff on my front nine, and my short game kept me in it. I had a lot of great up-and-downs. When I got to 10, I kind of re-set my goals and wanted to make six birdies on the back nine. I didn’t do that, but it was still a pretty solid back nine,” said Wise.

The University of Oregon sophomore, who currently ranks no. 6 in the World Amateur Golf Ranking, said he kept calm after a wobbly start and set about his business to rebuild his lead on Thursday afternoon

“It’s just knowing your own golf game,” said Wise of making a mid-round correction that paid off. “I’ve worked with my coach long enough to where I know what my swing does and my tendencies under pressure. I knew what I was doing out there; it was just a matter of me fixing it, and it took a few holes, but I did it.”

Wise will turn professional later this spring after completing his collegiate career, but said he isn’t getting ahead of himself even with a huge slate of tournaments on the horizon, instead choosing to focus on the round in front of him on Friday.

“We have a good game plan. It’s just a matter of me going out there and hitting the shots. I didn’t do such a great job on the front nine, so I hope to get off to a better start tomorrow, and I’m excited,” said Wise.