A sombre tribute to Arnold Palmer as Masters begins 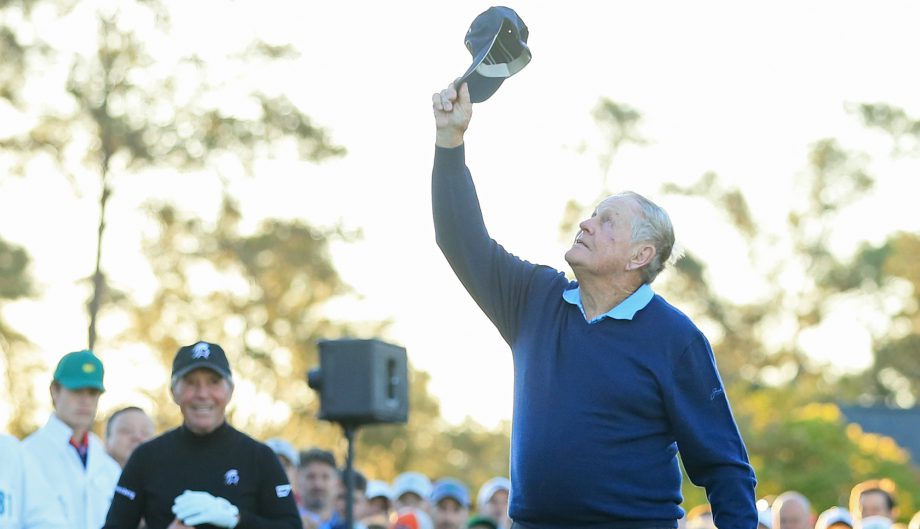 In a sombre tribute to Arnold Palmer, who died in September, Augusta National chairman Billy Payne escorted Palmer’s widow to the first tee for the honorary start. Payne also carried Palmer’s green jacket and draped it over a chair where Palmer had sat last April.

This is the first Masters without the King since 1954.

“The almost unbearable sadness we feel at the passing of Arnold is surpassed only by the love and affection for him that will always reside in our heart,” Payne said as thousands crammed around the first tee on a crisp morning full of sunshine and wind.

Every fan through the gate received a button that said, “I am a member of Arnie’s Army.”

Payne asked for a moment of silence so everyone could remember their own experience with Palmer – did anyone in golf have more friends? – and then turned it over to Jack Nicklaus and Gary Player for the ceremonial tee shots.

Player, who jokingly asked for a mulligan at age 81, drilled one down the middle. Nicklaus got him by about 5 yards, though Player was quick to announce it as a tie.

That’s how it was among the “Big Three” – Palmer, Nicklaus and Player, whose 34 majors among them included one stretch in the 1960s in which they combined to win the Masters seven straight times. They were best of friends off the course and hated losing to one another on the course.

Palmer had been part of the honorary start since 2007. He was so feeble a year ago that he did not hit a drive, though he still came out to the first tee and watched from a chair.

That’s what stood out the most to Player.

“Arnold was a great stickler for manners, and I’ll never forget, which really reminded me on the first tee this morning,” Player said. “Arnold could hardly walk to the first tee and he put his arms like this, and he stood up like this.”

To demonstrate, Player placed his hands on the side of his chair and lifted himself up.

“Because he had been taught to stand up,” Player said. “And he gave a little wave, and that was very touching to me, and I could see him doing it in that chair today.”

Brad Dalke, the U.S. Amateur runner-up, didn’t tee off until 11:30 a.m. and wanted to be sure he was out under the oak tree to see the honorary start. Rickie Fowler and William McGirt were among the players who came out to watch.

“I wouldn’t want to miss this,” Dalke said.

The “Big Three” has been referenced in recent years whenever three players separate themselves, if only briefly. The original concept had as much to do with marketing because Palmer, Nicklaus and Player were managed by Mark McCormack at IMG and would travel the world competing in exhibitions.

But it was as much about friendship.

“There will be other ‘Big Threes,’ but I don’t know if you’ll ever have another ‘Big Three’ that will live together like we did,” Player said. “I was in Jack’s home for weeks, and Arnold was in my home and Jack visited my farm time and time again. I was in their airplane. We really lived our life together. … Now, will that happen again with three guys? Possibly, I don’t know.

“It’s hard to be highly competitive against people and have a great friendship,” Player said. “And yet I sit here today and Jack Nicklaus is my best friend in the world.”

And they still are competitive, even after one shot.

Nicklaus was asked if he hit his driver farther than Player.

“Well, the official word was that it was a little past,” Nicklaus said “But Gary is claiming a tie.”