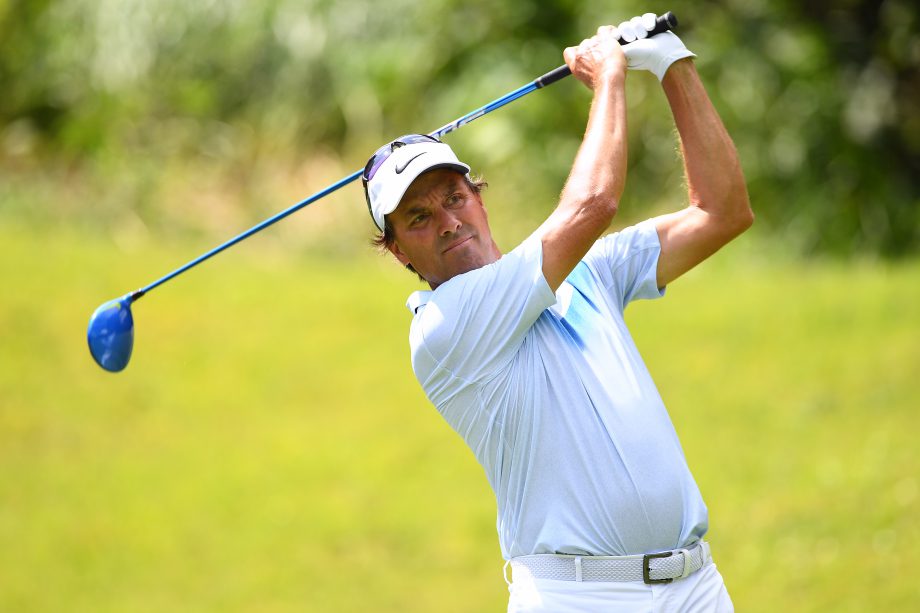 CHIBA, Japan _ Scott McCarron was in a familiar spot at the top of a PGA Tour Champions leaderboard in his first trip to Japan. California childhood rival Kevin Sutherland was close behind _ again.

Coming off his third victory in the last six tournaments, the 52-year-old McCarron shot his second straight 6-under 66 on Saturday at Narita Golf Club to take a one-stroke lead over Sutherland in the Japan Airlines Championship _ the senior tour’s first event in Japan.

Sutherland, tied for the first-round lead with Glen Day at 65, had a 68. Also visiting Japan for the first time, Sutherland made a 30-foot putt on the par-4 18th for his third birdie on the last four holes.

“I stayed really patient today,” Sutherland said. “I didn’t get frustrated at all. I wasn’t making any birdies and then all of a sudden you birdie three of the last four. But I think a lot of it was just early in the round I just didn’t let any sort of frustration creep in.”

The long-hitting McCarron birdied all four par 5s after birdieing three of them Friday. He saved par on 18 with a 6-footer to keep the outright lead.

“These greens are absolutely perfect,” McCarron said. “The golf course is in great shape, so we’re just having a lot of fun here.”

McCarron won the Shaw Charity Classic last week in Calgary, Alberta, to tie Bernhard Langer for the tour victory lead with four. The three-time PGA Tour winner won the Allianz Championship in February in Florida, the major Senior Players Championship in July in Maryland and the Dick’s Sporting Goods Open three weeks ago in upstate New York. He has six victories in the last two seasons on the 50-and-over tour.

“I prepared very hard to get ready for this PGA Tour Champions,” McCarron said. “I knew how good these guys were and I wanted to get my game in the best shape that I could possibly be in. I’m starting to reap some of those rewards from all that hard work. But it’s just been a lot of fun for me. That’s the biggest thing I think why I’m playing well, I’m really enjoying it out here.”

The 53-year-old Sutherland has five straight top-10 finishes. He was second in the Dick’s Sporting Goods Open and tied for third in Calgary to remain winless on the tour. His lone PGA Tour victory came at McCarron’s expense in 2002 at La Costa in the Accenture Match Play Championship, when he beat the fellow Sacramento, California-area player 1 up in the 36-hole final.

“I felt like I drove the ball a lot better today, which is a good sign for tomorrow,” said Sutherland, the only player to shoot 59 in tour history.

Todd Hamilton, the 2004 British Open champion and an 11-time winner on the Japan Golf Tour, was three strokes back at 9 under along with Colin Montgomerie and Carlos Franco. Hamilton birdied the last two holes and five of the last seven for a 65.

“I figured I would see some people I hadn’t seen for a while, which I have,” Hamilton said. “The Japanese people are very good hosts and I think we’ve been treated to a very good week.”

“The greens were most difficult today,” Montgomerie said. “They were quicker and the pins were on more slopes than they were yesterday, so it was harder.”

Day was another stroke back after a 72.

Ames’ second round 5 under 67 has him 8 under through 36 holes, four shots off the lead. Fellow Canadian Rod Spittle sits T14 at 6 under.

Massy Kuramoto topped the six Japanese players in the field at 5 under after a 72.

Fan favourite John Daly closed with a double bogey for a 73 that left him 2 under. Tom Watson, at 68 the oldest player in the field, was 1 under after a 73.