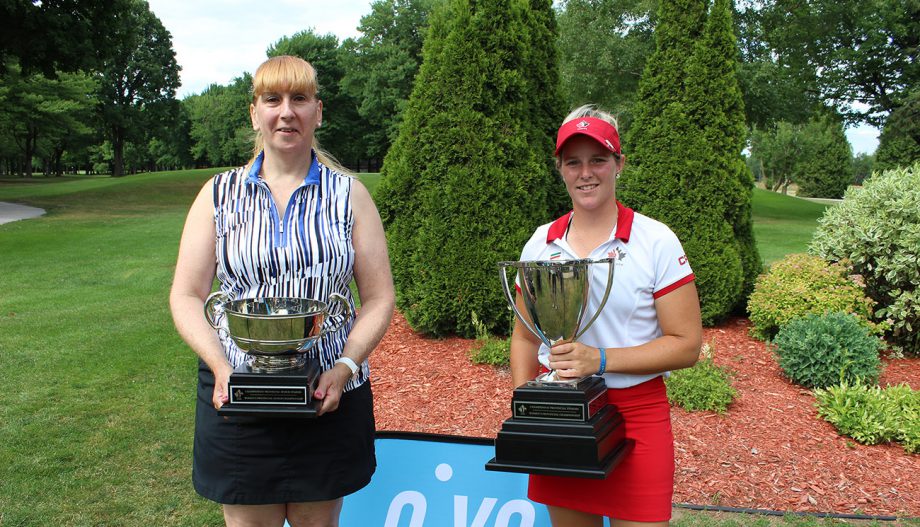 Montréal – The best golfers of Québec and Eastern Ontario were at Le Portage this week for the 91st NIVO Women’s Provincial Amateur Championship. Part of the Jocelyne Bourassa Series presented by NIVO, this event is also used to identify the Québec teams for the Canadian Championships to be held later on, in the season.

Josée Doyon of Club de golf Beauceville has retained its provincial title by winning the honors of the amateur competition for the second consecutive year with a cumulative score of 72-74-70-216 (E) for the three rounds of competition. Doyon grabbed the lead in the first round with Valérie Tanguay. She maintained his lead until the end. With two birdies on holes # 3 and # 14 in the final round, she ensured not only the first place in the tournament, but also his place on the provincial team.

Only 4 strokes behind, Grace St-Germain from Camelot took second place with a score of 220 while Katherine Gravel-Coursol of Blainvillier club was third with 223 strokes.

A thrilling challenge in the senior division
Francesca Palardy of the Parcours du Cerf was crowned in the senior category as she cumulated 148 (+4) after two rounds. Following her by 2 strokes, Hélène Chartrand of Summerlea took the second place with 150(+6) and Marie-Thérèse Torti of La Vallée du Richelieu ranked third with 152.

Two Québec teams
Josée Doyon of Beauceville, Katherine Gravel-Coursol of Le Blainvillier and Valérie Tanguay of St-Hyacinthe, are the first three (3) players on the Women’s Amateur Order of Merit of the Jocelyne Bourassa Series. As such, they will represent Golf Québec as its provincial team at the Canadian Women’s Amateur Championship presented at the Ken-Wo GC, Nova Scotia, from July 26 to 29, 2016.

Hélène Chartrand of Summerlea, Marie-Thérèse Torti of La Vallée du Richelieu and Marlene Desbiens of Murray Bay, are the first three (3) players on the Women’s Senior Order of Merit of the Jocelyne Bourassa Series. They will compose the Golf Québec team for the Canadian Women’s Mid-Amateur and Senior Championship to be held at the Wolf Creek Golf Resort, in Ponoka, Alberta, from August 24 to 26, 2016.

Le Portage and Golf Québec honoured Lucile Theroux
A founding member of Le Portage, Lucile Theroux has been an active and dedicated member for over 53 years. She is always available to support and represent her club. Very respectful of the game of golf, its etiquette and rules, as well as of her partners and competitors, she truly personifies sportsmanship. She is always sharing her passion for golf with professionalism and enthusiasm. Throughout the years, Mrs. Theroux has always been a dedicated volunteer and rules official both at the regional and provincial levels.

The Club de golf Le Portage and Golf Québec are thanking her for her exceptional contribution and support. We will forever be grateful to her for her time and dedication.