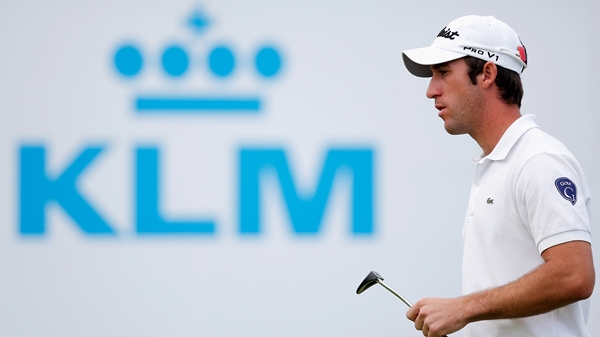 ZANDVOORT, Netherlands – Romain Wattel of France shot his third consecutive round in the 60s on Saturday to take the KLM Open lead at 14 under as Paul Casey narrowly missed the first ever 59 on the European Tour.

Wattel had seven birdies before a single bogey on the 17th for a 64, to follow up rounds of 67 and 65 on Thursday and Friday and take a three-shot lead over second-placed Richie Ramsay of Scotland.

Needing an eagle for a 59, his second shot on the par-four ninth – the last hole of his third round – pitched close to the cup before spinning left and off the green.

The Englishman then over-hit his chip back onto the green and two-putted to finish with his first bogey and a wry smile as he matched the course record of 8-under 62 set a day earlier by overnight leader Pablo Larrazabal.

Starting his round from the 10th, Casey made five birdies on his outward nine and four more coming home before his final-hole bogey.

« I’m really not bothered about the 59, I wasn’t thinking about it. It wasn’t until my caddie said that was almost a 59 that I thought about it, » said Casey, whose partner gave birth to the couple’s son on Sept. 1.

« The disappointment was making a bogey on the last, not in missing out on a 59, » Casey said. « I’m just happy I’m playing some good stuff. Life is great. I’ve got a little one at home now, and it just means I have to go home a little later now. »

Defending champion Joost Luiten of the Netherlands recovered from a quadruple bogy nine on his second hole to post a 3-under 67 that left him still in the hunt, six shots behind Wattel.

« Not the start I wanted, » Luiten said.