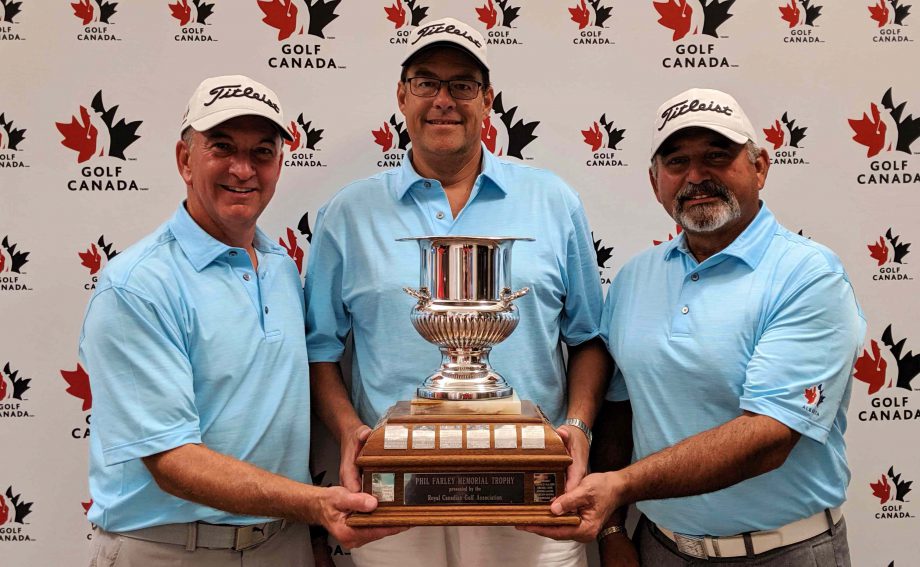 The Alberta trio, consisting of Ken Griffith (Red Deer), Brian Laubman (Edmonton) and Frank Van Dornick (Camrose) combined for a second-round score of 4-under to capture the Phil Farley Memorial Trophy with a team total of 282 (-2).

“Each guy just wanted to try and play as well as he could, not only for himself but also for the team,” said Alberta’s Van Dornick. “We didn’t hear any numbers out there, but we knew it was close coming down the stretch.”

Team Alberta didn’t realize how close the competition was. With the sun nearly set, Alberta’s Griffith holed a 10-foot putt for birdie on his final hole to solidify the team title.

Finishing runner-up, a single shot back of Alberta was Team Ontario. The team of David Greenaway from Barrie, Robert Gibson of Toronto and Ashley Chinner of Brooklin had a two-day tally of 283 (-1).

The Team from British Columbia, which included Doug Roxburgh (Vancouver), Jim Shaw (Sooke) and Sandy Harper (Nanaimo) rounded out the top three at 290 (+6).

Gene Elliott of West Des Moines, IA, carded the low round of the tournament, a 5-under par 66, to move into sole possession of the lead overall in the individual competition.

Elliott, who captured the 2017 Canadian Men’s Senior title, sits 5-under and has a three-shot lead over the field.

“I kept the ball in play, mostly below the hole and putted well,” said Elliott. “Yesterday was windier and I didn’t hit it a lot different today. But I made more putts today and that helps.”

Trailing Elliott is a pair of Canadians. Mark Brewer of Pickering, Ont., carded a 68 Wednesday, while Red Deer’s Ken Griffith shot 69. The pair sit T2 at 2-under.

Following the opening two rounds, the field was reduced to the low 70 players and ties. A total of 70 players finished at +14 (156) or better to sit inside the 36-hole cutline. The third round will begin Thursday at 8:30 a.m. EDT. 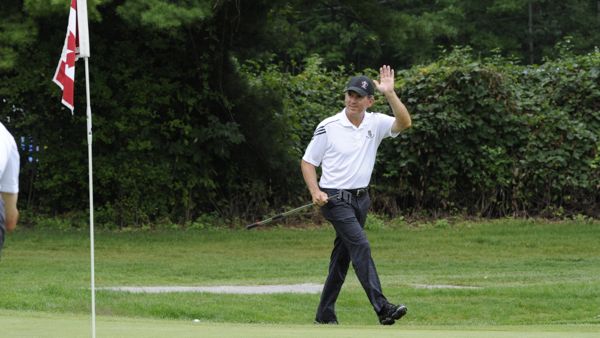 Chip Lutz started his title defence of the Canadian Men’s Senior Championship by firing a 4-under 67 at The Briars Golf Club on Tuesday.

As a two-time champion of the event, Lutz’s round was highlighted by an eagle on par-5 9th hole and five birdies. Lutz got off to a rocky start on Tuesday, opening his round by missing an 18-inch par putt on the 1st hole. He rebounded with a front-nine 3-under 33 and closed with two great par saves over his final two holes to head into the second round with a one-stroke lead.

“It’s a good start and a good opening round to get going even though it didn’t really look that way after the first hole,” Lutz said. “I gathered it and birdied No. 4 to get that back and then finished with a birdie on No. 8 and an eagle on No. 9.”

Lutz enters the championship as the highest ranked player on Golfweek’s Senior Amateur Rankings at No. 6. The Reading, Pa., native said he feels much more comfortable playing The Briars after seeing the course a few times.

“The corners come up on you quick and you have to hit the right distances and put it on a good line because it’s very tight and very narrow,” he continued. “The greens are terrific, if you hit a good putt you’re going to make some putts out here.”

Calgary’s David Schultz sits in second, one-stroke behind Lutz after a bogey-free 3-under 68.

“I made a 10-footer for par on No. 10 to keep it going,” Schultz said. “I missed a bunch of birdie chances on the back that you always want back but it was a pretty solid start.”

Parsippany, N.J., native Jay Blumenfeld and Lance Lundy of Pemberton, B.C., sit in a tie for third after a pair of 2-under 69’s, while four players are tied for fifth at 1-under.

In the Inter-Provincial team championship, Team British Columbia leads by three-strokes heading into the final round. The contingent of Lance Lundy of Pemberton, B.C., Brian De Biasio of Qualicum Beach, B.C., and Norm Bradley of Kelowna, B.C., combined to card a 1-under 141 to sit ahead of the Team Alberta squad of Howard Broun of Calgary, Floyd Kilgore of Grimshaw, Alta., and Frank Van Dornick of Camrose, Alta., who posted a 2-over 144. Team Ontario currently sits at 4-over 146 in third place.

Michel Riverin of Brossard, Que., currently leads the Super Senior Division (70+) after a even-par 71 that was highlighted by four birdies. Walt Martin of Oakton, Va., trails Riverin by two-strokes after a 2-over 73, while Mickey Batten of Chateauguay, Que., and Robert Fugere of Gatineau, Que., sit in a tie for third at 3-over.