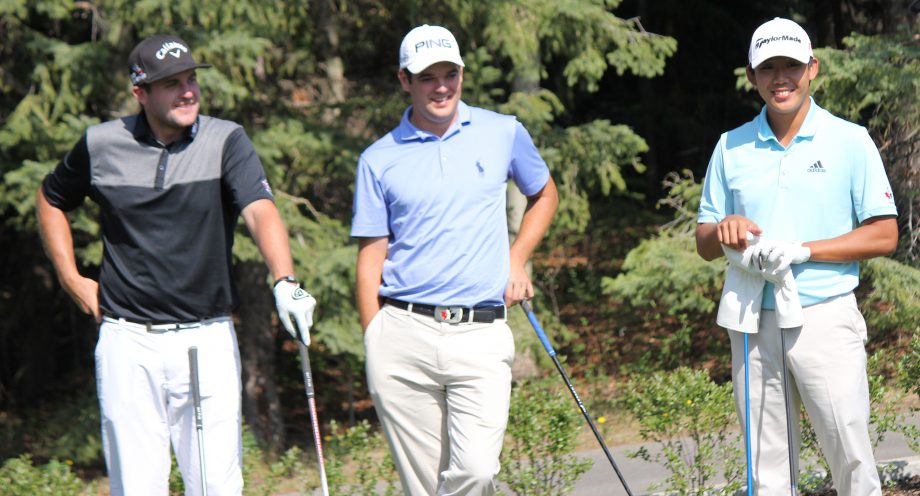 It’s no secret the road to the PGA and LPGA tours is a long one. It’s also bumpy, narrow and exhausting too, which is why few golfers actually make it to the end.

But three years ago, Golf Canada set out to clear as many obstacles on that road as possible. It unveiled its Young Pro Squad, an extension of the National Team program designed to strengthen the support athletes receive after turning professional.

“The goal is to support players in the first three to five years of professional golf to get them on track and hopefully starting to make a living,” explains Jeff Thompson, Golf Canada’s chief sport officer. “They can then reinvest in themselves and recognize the things that have helped them along the way. They may continue to look for our support and services but at that time they can pay for it instead of us.”

Administered by Golf Canada and funded by the Golf Canada Foundation along with founding partners CP and RBC and supporting partners Citi Canada and the Golf Canada Foundation Women’s Fund, there have been plenty of positive changes since the program’s inception. Financial support, for example, has increased over 56 per cent since Year One. Members of the 2014 squad shared approximately $205,000 in resources towards coaching, training camps, sports science and travel expenses. That number was elevated to $304,000 in 2015, and is up to a projected budget of $320,000 this year. That works out to a value of about $40,000 to $50,000 per player.

Martin Barnard, Golf Canada Foundation CEO, says the key to the program is that it isn’t just throwing a bunch of cash at young men and women.

“There are players who have received money in the past and still struggled to climb the ladder despite their talent level,” adds Barnard. “They didn’t necessarily know how to hire the best coach or put a support staff together. You’ve got well-intentioned parents and well-intentioned families but they don’t necessarily know how to embark on a pro career either. What we’re doing is giving that expertise to help guide them.”

Sports science is one of the major components of the program that has been revamped thus far. Initially a group of specialists were selected to assist the players but it was revealed that each individual varied in the areas they needed to address.

“Trying to paint everybody with the same brush was not the most effective way of using the resources,” says Thompson.

The staff and coaches are now working with each designated player at the beginning of the year to conduct a gap analysis — essentially collaborating to identify the best use of resources for each athlete, be it mental, nutritional, physiological, biomechanical or something else. Golf Canada then seeks out specialists who can service those needs around each player’s primary training base, something that wasn’t done previously. Originally the program had dedicated specialists in one location, which all players weren’t able to take advantage of.

Refining the selection process of the squad has been another improvement. Criteria have been identified to grade deserving candidates, mostly centred on world ranking benchmarks that need to be achieved. The goal is to convert talented, unpolished kids into top-100 players.

“We’ve done a fair amount of data mining on what the progression of a top-100 world player should be from when they turn professional through the first four to six years of their career,” Thompson adds. “There are always outliers in terms of how fast they get there but we have benchmark world rankings of where we’d like our players to be at — Year One, Year Two, Year Three, Year Four if they’re going to be on track to be a potential top-100 player.”

Golf Canada believes the effectiveness of the Young Pro Squad will create a valuable trickle-down effect to the grassroots levels of the game. The more players are seen on TV and in other forms of media, the better.

At this time, a finite amount of resources is limiting the growth of the Young Pro initiative. With a current capacity to support six athletes, officials see the system backing around 15 players in the future. Key to that is an influx of dollars to the Foundation. There would be multiple-year commitments if team members were doing all the right things and new professionals would replace those who attain self-sustainable status.

The current road to elite golf is a challenging journey, but Golf Canada is hoping its Young Pro initiative will pave the way for future generations.

LEARN MORE: To support the Young Pro Squad and contribute to the development of Canada’s next crop of golf stars, visit golfcanadafoundation.com.

This article was originally published in the May 2016 edition of Golf Canada Magazine. To view the full magazine, click the image to the left.