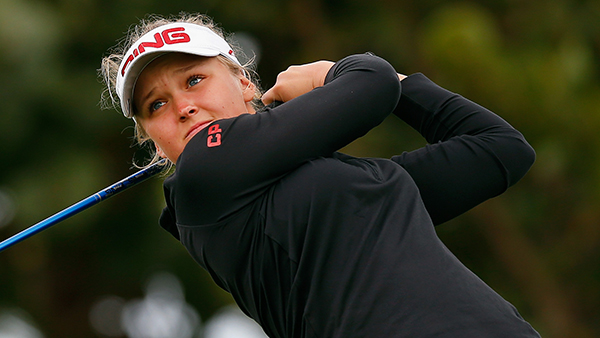 Brooke Henderson finished tied for 33rd in her first tournament as a pro and faces having to qualify for many of the LPGA Tour events she wants to play this season, but the Canadian teen couldn’t be happier.

Just over two months after declining a golf scholarship at Florida to play full-time on the LPGA Tour, the 17-year-old native of Smiths Falls, Ont., is relishing her decision.

« Getting to wake up and do what you love every single day is pretty cool, » Henderson said via telephone this week from Phoenix. « School would’ve been a great option for a lot of people, it just wasn’t for me at this time.

« Being able to do what you love is such an amazing feeling, especially being able to spend it with my sister, who’s also on the same journey as me. »

Brittany Henderson, 23, not only serves as her younger sister’s caddy but is also an aspiring pro golfer herself. On Friday, the elder Henderson will play in the $100,000 Gateway Classic in Mesa, Ariz., the opening event on the Symetra Tour, formerly the LPGA Futures circuit.

Brooke Henderson made her 2015 LPGA Tour debut earlier this month in the $1.3 million Pure Silk-Bahamas LPGA Classic at Paradise Island, Bahamas. Despite opening with a 2-over 75, Henderson shot a 5-under 287 total to finish tied with American veteran Morgan Pressel and earn US$8,917.

Henderson won her first event as a pro Jan. 30, outduelling her sister to capture the opening event of the Suncoast Series Tour in Winter Garden, Fla. Henderson earned $2,200 for the victory while her sister collected $1,200 for finishing second.

While she’s had a promising start, Henderson knows the life on the pro circuit won’t be easy.

« This year is going to be a learning experience and I know that, » she said. « There’s going to be ups and down and I’m ready for that.

« Having no status on any tour and just playing and fighting my way into every event, it’s going to be a long season but I’m excited. I’d love to move up my world ranking even higher than it is now, around 200. Getting close to the top 100 by the end of the season would be a big goal for me and just becoming a better person and golfer every single day. »

Henderson was the world’s top-ranked amateur women’s player last year and made the cut in all four LPGA events she entered. Henderson captured the individual title at the world amateur championship before helping Canada finish second in the team event.

Henderson also finished tied for 10th – and was the top amateur – in the 2014 U.S. Women’s Open and tied for 26th at the Kraft Nabisco Championship, also a major. In addition, she was the low amateur and low Canadian at the Canadian Pacific Women’s Open in London, Ont.

Henderson said nerves were no more an issue at Paradise Island than they were in any of the four LPGA Tour events she played in last year. However, she did admit to putting more internal pressure on herself to play well in her first event as a full-time pro.

« Not really jitters but I was feeling it a little bit, » she said. « Just that it was my very first event and I wanted to play really well. »

While having her sister nearby has helped Henderson adjust to her new life, so has the reception she has received from other Tour members.

« It’s been amazing, » Henderson said. « They’ve all said, ‘Hi,’ and asked if I needed anything or had any questions and were extremely open to having a newbie on tour.

« The Canadians have really stepped up to and not necessarily just the veterans but also those who’ve been out there for a couple of years. They’ve really made me feel welcomed. »

With the next three LPGA Tour events in Australia, Thailand and Singapore, Henderson has set her sights on the $1.5-million JTBC Founders Cup, slated for March 19-22 in Phoenix, as her next event. Also on Henderson’s radar is playing well enough at Q-school this fall to secure her LPGA card for 2016.