The greatest golf video games of all time 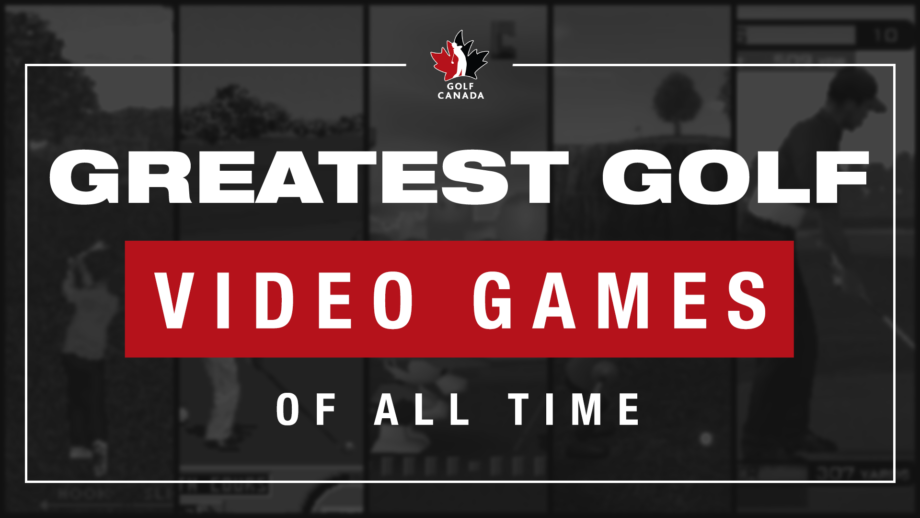 Did you know there’s a Canadian connection to the most anticipated golf video game in recent memory?

HB Studios, based in Nova Scotia, was recently acquired by iconic sports video-game company 2K – which inked a long-term, exclusive partnership with Tiger Woods. 2K purchased HB Studios, the developers of PGA TOUR 2K21 as well as its ‘The Golf Club’ franchise.

“I am looking forward to making my return to the video game landscape, and with 2K and HB Studios, I’ve found the right partners to make it happen,” said Woods last year. “I’m honoured to take part in this opportunity and look forward to sharing my expertise and insights as we build the future of golf video games together.”

With Woods’ injury, the release of the next 2K game has been postponed, but that doesn’t mean we can’t celebrate some big-time golf releases from the past.

Whether it’s an all-time classic or merely a nostalgic game that prompts some fun memories with friends, here are the top give golf video games of all time.

Released in 1989, the Golden Tee machine has become a staple in bars (and some lucky homes!) for more than 30 years. Originally the project was meant for a large-scale golf simulator, but it was scrapped by the developer. The programmer decided to press on with the idea – after having already written the software to create virtual golf courses – and since then the machine has become as synonymous with bars as cold beer and nachos. The simple game-play format – pulling back that iconic trackball and flying it forward – remains a joy.

The Nintendo Wii, when released in 2006, had a pack-in game included with each system. Alongside tennis, baseball, bowling and boxing, there was golf.

The Wii allowed for its users to have fun with the motion-sensing capabilities of the Wii remote which means, yes, you can absolutely swing the remote like you would a real golf club.

Other video game franchises would take advantage of the Wii’s capabilities (Tiger Woods PGA Tour 12, for example, allowed for users on the Wii to swing the control) but the original Wii Sports golf effort was fun, different, and set the stage for other motion-controlled games moving forward.

Before there were gaming systems, there were games played on your desktop computer and Links: The Challenge of Golf, set off a well-received and incredibly exciting PC-based franchise.

Links was first developed by Access Software and then later purchased and developed by Microsoft. The Challenge of Golf even won Computer Gaming World’s Action Game of the Year award… in 1991. It featured basic enough game play, but some fun destinations for courses and allowed users to play as Arnold Palmer.

The last game in the Links franchise came in 2004 and was available on Xbox.

It should come as no surprise as the perhaps the most iconic character in video game history tees it up. The first game to feature Mario as a golfer was NES Open Tournament Golf, released in 1987. Mario Golf, as a title, made its debut for the Nintendo 64 in 1999 and received critical acclaim. The latest edition, Mario Golf: Super Rush, was released for the Nintendo Switch in 2021.

There was a variety of gameplay modes (a staple of the franchised that continued with the Super Rush release last year) and it’s equally fun for novice golfers (and gamers) but serious enough for golf lovers, too.

1999 marked the first year that Tiger Woods’ name was featured alongside EA Sports’ golf game and for more than a decade it was on the cutting-edge of golf video game play. There were plenty of iconic years (like 2012, when Augusta National made its debut) but the consensus online is that 2004 was the best. That version featured 20 courses – the most in a Tiger Woods game to that point, continued to build on the 2002 introduction of the ‘analog stick’ game play, and had a banging soundtrack.

Of note: Originally set for this year, EA Sports and the PGA Tour have announced a pivot in their launch strategy for the latest EA Sports golf title (which will not have Woods’ name attached to it). The new game will be released in 2023 and will feature all four men’s major championships, the FedExCup playoffs, courses like Pebble Beach and TPC Sawgrass, PGA and LPGA Tour pros, multiple amateur events, plus ShotLink and TrackMan data.

“EA Sports PGA Tour is our first HD golf game in seven years and we wanted to give it the time to make the best game possible,” a spokesperson from EA Sports told Sports Illustrated in March.