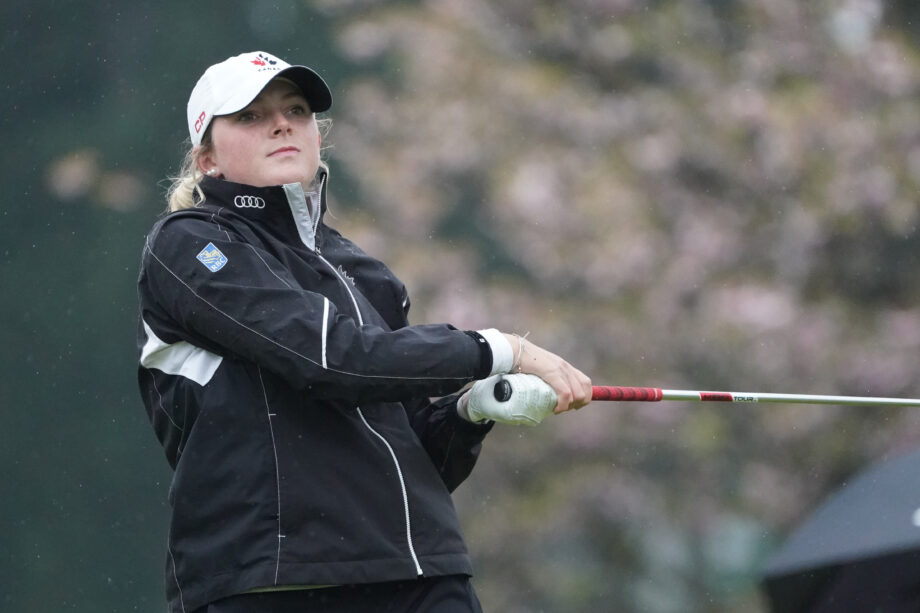 Katie Cranston [NANAIMO, BC - 15 May 2022] Final round of the NextGen Pacific Championship at the Nanaimo Golf Club. (Photo: Chuck Russell/Golf Canada)
Jonah Bronstein

LEWISTON — The finishing holes at Niagara Falls Country Club have traditionally stressed the cardiac function of amateur golfers in championship pursuit. That held true again Friday in a dramatic conclusion to the ninth Women’s Porter Cup.

On her fifth lap of the undulating, 165-yard 18th hole, Katie Cranston wondered what the monitor on her wrist was reading about the physical and mental strain incurred by a late-round rally and an extended sudden-death playoff.

Cranston, an 18-year-old from Oakville, Ontario who will play college golf for Auburn University, emerged from five strokes back with five holes remaining in medal play to match Rivers at 5-under par 211 through 54 holes and force a playoff.

“I honestly thought it was over,” said Cranston, who pulled within a stroke of Rivers after opening the back nine with a pair of birdies, only to give four back with a bogey on No. 11 and double-bogey on 12. “I just thought, secure your second place and be happy with that.”

Officials ceased speculating on who might win and started questioning whether Rivers, a 17-year-old from Brampton, Ontario who competes for Canada’s National Amateur Squad and has committed to Wake Forest, would break the tournament record (11-under) held by Brooke Henderson (2014) and Ana Paula Valdes (2018). Having entered the final round with a one stroke lead at 5-under par, Rivers went 10-under after making birdie on her opening three holes and five of the first 12 on Friday.

That was before Rivers’ approach shot on the 360-yard 14th hole ricocheted off a greenside hill and rolled a foot beyond the out-of-bounds stakes. Rivers, who carded just three bogeys through the first 49 holes and none yet in the final round, took a triple on the par-4, trimming her lead to two strokes.

Rivers maintained that advantage as she and Cranston both made double-bogey on the 16th hole and birdied the 17th. Shooting from the elevated tee box on the 18th, Cranston landed within 10 feet of the pin before sinking her birdie putt, while Rivers plopped in the sand trap beneath the green on her way to another bogey.

“We both had a couple hiccups,” Cranston said. “It was honestly just a big mess. But we kind of equaled each other out.”

The tension increased through repeated battles on No. 18. They went shot for shot three times through, following one another into bunkers off the tee and downhill putts skirting past the cup for par-bogey-bogey.

Both took an extra club for the fourth playoff tee shot into a stiffening wind. Cranston blasted out of the sand to the middle of the green and two-putt from 15 feet for bogey. Rivers putted once from the fairway in front of the green and three more times from closer range to give Cranston the victory.

“Reading the greens were quite difficult, and putting was definitely my weak point,” Rivers said. “The entire week, I played well, was swinging it well, was hitting it how I wanted to. My short game was where I needed it to be. Putting was what let me down.”

Cranston admitted her focus waned as fatigue accumulated on the playoff holes.

Cranston’s cheerful demeanor, however, held up as the pressure mounted.

“I was happy either way,” Cranston said. “Obviously, I’d be a little bummed if I didn’t win. But I was happy with myself if I would’ve pretty much T-1. I was kind of loose, and if she made a good putt, she deserved to win.”

Rivers concluded Cranston “was solid, kept her game together, stuck to what she was supposed to do, and kept hitting good shots.”

No matter how fast her heartbeat.